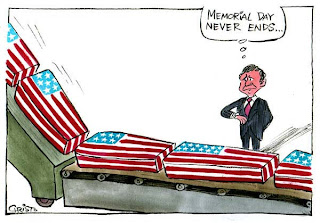 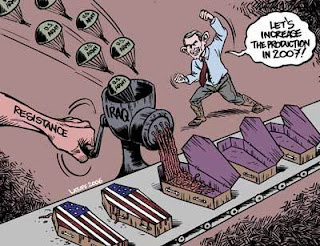 Our troops have done what the purpose was for going to war, now if this man cant call off the occupation of Iraq, than we must stop him.

We keep saying what the House and Senate did not do, when we did not put enough people in office to actually over ride a veto or call for an impeachment.

God, I hate to say it but those cartoons are absolutely indicative of what W's stubborness is costing us. Too sad.

We keep saying what the House and Senate did not do, when we did not put enough people in office to actually over ride a veto or call for an impeachment.

Agreed. We should be ashamed of our leaders but also of ourselves. We are responsible for whom we elect or for the fact that principled people can't, or won't, choose to run themselves.

LT, I know what you're saying about not putting enough Dems in office to do the things necessary, however the Dems should have been able to pull enough Repubs over to their side to override the veto. That is where they failed.

elvez, I agree. It's sickeningly sad.

kvatch, I am ashamed of most of our leaders. Any Dem that voted for this last amendment, should be replaced.

Don't worry, I think plenty of those Dems who voted for the latest amendment probably WILL be replaced in 2008, and sadly, they will probably be replaced by Republicans. It's just too sorry a thing to contemplate...

The cartoons perfectly illustrate Dubya's lack of empathy. I believe he is incapable of putting himself in someone else's shoes.

Does this guy actually have any friends? How can his wife and kids stand him? (How can he stand them, for that matter?) Why don't people understand that Bush is like an automaton when it comes to certain things?

LT is right, the original mission was accomplished, and the subsequent revisions of the "mission" have been "accomplished" until we have gotten to the point where the administration no longer seems to have any "mission" that even THEY can define. They're stuck, they know it. The war is unpopular, they know that too. But I guess if the Dems can't mount enough of an offensive to pry Bush out of Iraq, then Bush believes he might as well stay. I'm sure he will be trying to make things such that if a Dem gets the White House, it will be extremely difficult for her or him to get us out of Iraq.

This is why I think it is paramount that the Dems retain control of Congress, as well as win the White House. I don't like it when one party is in complete control, but I think it will be necessary for accomplishment any reversals of Bush policies. The Dems might only have two years, maybe four years to get things done, but it's vital that they have the opportunity. Without opposition strong enough to kill their measures, I think the Dems will do o.k., and that by 2009 we will be getting out of Iraq. I just wish they had the spine to do what they were elected to do, and I have to wonder what will happen re. Iraq matters such as the new Vatican-style embassy, etc. I am just cynical enough to believe that there is enough oil money tied up in the Democratic party that some things might not change at all, re. companies dictating foreign policy...