Sean Penn should run for office 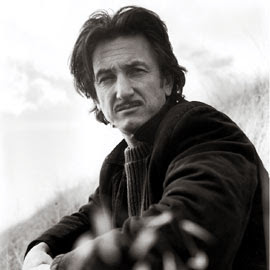 I love Sean Penn. Always have.

From Fast Times at Ridgemont High to Falcon & the Snowman to Dead Man Walking to Mystic River, and all the films in between, he is one of the best actors of our generation.

And now that he's speaking his mind about politics and the criminal Bush administration, I think he should run for office.

Here's a clip of what he said last night on Real Time, and following that is New Rules. I tried to post the video, but once again, Blogger is acting shitty.

As far as the rest of the show, Garry Shandling monopolized at times, but his one-liners were killer.

I like some of the things he says and do, but I do not know his experience on other matters to run for anything.

The show was not all that great the other night, something was missing.

I thought Penn was great. He seemed very thoughtful. And I agree with you regarding Shandling, he was very funny.

Penn is fantastic. I am impressed with all the social justice causes he's involved in, and it was so nice to see him gettings his hands dirty helping the Katrina victims. He is truly one of those that uses celebrity to be a force of good in the world. Good pick!

That clip was great. Penn's comment was great! I couldn't agree with him more.

I like it when celebrities use their star power in attempts to help people. Of course Penn is dismissed as a whackjob by most rightwingers, but I think that is mainly because they can't figure out how to refute him... thus they call him names and make fun of him. How mature!

They love to diss "Hollywood", but I sure don't mind that lots of celebrities are leftists and tend to help with humanitarian and/or environmental causes. If stars know people pay attention to them enough that they'll pay attention to their opinions as well as their entertainment, and if their opinions and actions tend to lead toward the betterment of America and the world in general, I say more power to 'em.

The hardcore Hollywood-dissers are jealous, plain and simple. They don't have such a way to get their message across. Their hearts must be lots harder than those of, say, people such as Sting, Sheryl Crow, Sean Penn, and countless other celebs.

Let's Talk, If Penn thinks BushCo should be in prison, it would be safe to assume that his opinion on other matters are good ones.

I thought it was a good show overall.

playtah & Snave, I agree. Penn & celebs like him, walk the walk. The dissers are a bunch of haters. Screw 'em.

I'm in between about another actor running for president, but his acting ability would sure help him. He'd give a command performance on the campaign trail.

And the most fun part would be watching the Far Right go absolutely ballistic. They hate him with a passion, even more than Cindy Sheehan or Michael Moore.