I knew it was only a matter of time until BushCo went after Moore. 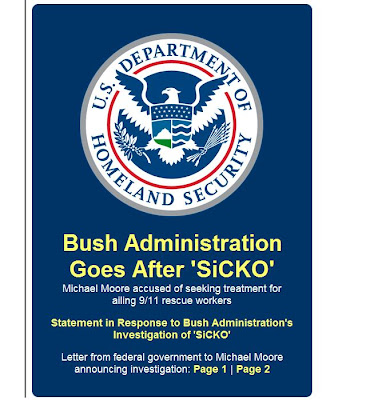 From Michael Moore.com:
May 10th, 2007 9:34 am
Statement in Response to Bush Administration's Investigation of 'SiCKO'

'SiCKO,' Michael Moore's new movie, will rip the band-aid off America's health care industry. Premiering at the Cannes Film Festival in just one week and opening across the U.S. on June 29th, 'SiCKO' will expose the corporations that place profit before care and the politicians who care only about money. Our health care system is broken and, all too often, deadly. The efforts of the Bush Administration to conduct a politically motivated investigation of Michael Moore and 'SiCKO' will not stop us from making sure the American people see this film.

On September 11, 2001 this country was attacked. Thousands of Americans responded with heroism and courage, toiling for days, weeks and months in the ruins at Ground Zero. These 9/11 first responders risked their lives searching for survivors, recovering bodies, and clearing away toxic rubble. Now, many of these heroes face serious health issues -- and far too many of them are not receiving the care they need and deserve. President Bush and the Bush Administration should be spending their time trying to help these heroes get health care instead of abusing the legal process to advance a political agenda.

Remember when Michael Moore had his show on A&E? I remember the episode where the man who needed a liver transplant was denied by his insurance company so they decided to stage the guy's funeral (with the patient participating) outside the corporate headquarters. I wonder if this film is an outgrowth of some of the things he found when doing that story.

It is no surprise that Bu$hCo is going after Moore. After "Bowling for Columbine" and "Fahrenheit 9-11", I'm surprised they took this long. Bush and his followers are the types who view people who disagree as needing a punishment of some kind... they are definitely into the retribution thing. While their actions will probably end up costing Moore a lot of money and slowing him down a little for when he goes to make the next film, I don't see how it can do anything but generate interest and publicity for "SiCKO", and it certainly won't keep the film from being released and seen in the U.S. This is a case where sure, they might get Moore into trouble for traveling "illegally"... but I don't think they would dare making him more popular, or turning him into a figurative or literal political martyr. What they are doing is just way too transparent.

As Bu$hCo gets more and more desperate, are we going to see things like mysterious deaths, plane crashes, disappearances, car wrecks, etc.? Or, at least, more vocal anti-Bush people getting accused of dubious violations of the law? I guess I am surprised they haven't really gone after Al Franken as hard as they might be. Or Jon Stewart, or Bill Maher, or Keith Olbermann, or Stephen Colbert... Sean Penn is another one who is probably being watched closely by the government.

I guess if they can't curtail our free speech by killing us outright, they can try and do it by trumping up charges and abusing their power against us. This kind of stuff used to happen all the time in the Soviet Union, didn't it? There wasn't really any free speech there, but talk about a government abusing power... I don't like to compare the Bush administration with the German Nazis (like Putin does!), but ya know... if they were allowed to stay in office beyond this term, what kinds of things might they try in order to get a firmer control over Americans?

Damn there finally going after the capped one, guess their finally comming around to getting even, hmmm I would say its to late, bastards.

There will be a lot more of this as BushCo approaches it's last days in office.
Eventually they'll even start making use of all that data they sniffed through illegally on the American public.

Vengeance is what the mentality of these folks are all about.

There hasn't been a point to a Cuba embargo for decades - it does the Castro regime in Cuba more good than harm.

Moto, Yep, I remember that show very well. I bet that episode did touch off this idea for a documentary.

Snave, I think we have already seen things like mysterious plane crashes (Paul Wellstone) and disappearances (flight 77.) And, I have no doubt they keep a close eye on Maher, Stewart, Colbert, Olbermann, etc.

I also have no doubt that our blogs are being monitored. Putin was right. This is super-scary shit.

Damien, They still have 618 days left in office. It's not too late.

I cant believe they are doing this because Moore because he took ten aling workers from the Ground Zero rescue effort in Manhattan for treatment in Cuba...because our health care system and this President want do what they should for these heroes.

I also posted on this same thing. It's already a terrible commentary that people have to go to Cuba to get medical treatment that they can't get here. Then on top of that the government persecutes those people who went to Cuba instead of trying to do something about our health care crisis.

Snaves right, the Bushies are helping Moore get more publicity for his film. Let's hope the portly one has a good team of attorneys on this one, I hope he uses this as an opportunity to show what a police state we have become.

All I know is that Moore better fight 'em hard on this...and I can't wait to see the film.