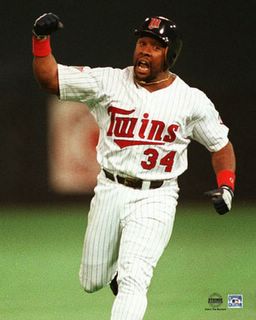 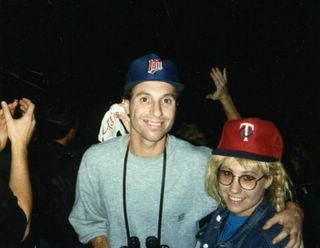 I took my late father to game 7 of the 1989 Series. One of the best times of our lives. Kirby was an awesome player. How sad.

Back in the mid 80's, when I was managing Duffy's/Norma Jeans Kirby and s few friends came in. It was a very slow night, so I wasn't busy. I offered to buy him a drink (he had a Sprite) and we talked baseball for about 2 hours. What an impressive man! He wanted to play baseball since about age 5. He told me that they didn't even have to pay him. He would have done it for nothing. The best years of his life was as a Minnesota Twin. He turned down more money to play in big-market cities. He was a gentleman as well as a true hero. I never believed the money grubbing woman that sued him (he was aquitted) and never liked his wife that married him when he was on top of his game and then left him shortly after his forced retirement.
My son, Noah was born the day of Game 1 World Series 1987. I thought of naming him Kirby, but my husband wanted no part of that.
I made sure to give birth in plenty of time to watch the game in peace. Not to go on and on...I'll sum this up by saying that Kirby Puckett lived for baseball, and every summer..so do I.
Laura

It may seem odd that someone from the Pacific NW would be a Twins fan, but I have been one since I was about 10. I used to love the Twins especially in the good old days when they had Tony Oliva, Rod Carew and Harmon Killebrew (my favorite all-time player). We had no major league baseball in this area at that time, so what I saw on TV was what I got... and the Twins were the most exciting team in baseball for me.

I have continued to follow the Twins throughout the years, even though they haven't been as important to me since the inception of the Seattle Mariners in the late 70's.

Kirby Puckett was one of my favorite players of his time. I was overjoyed when he got into the Hall of Fame, and I like to think about what his career might have been like had he not had to retire prematurely. He was so deserving of the Hall, not just because of his talents, but also because of his exuberance, his hustle, and his genuine love of baseball.

He has been one of my favorite ex-players as well, because of the positive thoughts the mere mention of his name brings to my mind.

This is a sad time for the Twins, for major league baseball, and for baseball fans around the world including yours truly. RIP Kirby.

Heck even I knew who Kirby was, and I live in NZ and only occasionally ever watched BB back in the day.

Thanks for sharing those great memories.

Snave, when I was growing up, my favorite Twin was Rod Carew.

Carew! One of the greatest hitters of all time!

Harmon is my fave partially because he is from the Payette, ID area, about two hours from here, and his birthday is the same as mine, June 29. Sure he was born in 1936 and I was born in 1957, but hey... sharing a birthday with Harmon is an honor!

Hey Snave,
Liz's sister here..
We have almost common birthdays.
Mine-7/29/57
Also loved Harmon and attended many games those years. Parked across the street at the Thunderbird (free), ducked under the fence, walked across the parking lot, bought a $4.00 ticket and sat anywhere I wanted. Those were the days.

Hey Lizzy's Sib, that's very cool! I always wanted to go to see some Twins games at Metropolitan Stadium (isn't that what it was called) in Bloomington, MN (isn't that where it was?) On TV, it always showed this huge grandstand in right field, I think it was. I sent a letter to the Twins ballclub when I was 10 or 11, and they sent me back a "Win Twins" decal, some stickers, and some pictures of players. Wish I still had all that stuff!

Outdoor baseball is the best. I've seen games at Spring Training in AZ, and I've watched games at Wrigley Field in Chicago and at Milwaukee's old County Stadium. Nothing better for sporting events! I suffered through having to watch major league games indoors in the Kingdome for a number of years, until Seattle got wise, tore it down and built Safeco Field... a fantastic place!! The Kingdome was like a concrete tomb. Think the Twin Cities will ever have outdoor major league baseball again?

Hi Snave,
Hoping to get outdoor baseball back again. They've got several sites, but these native Minnesotans just won't vote for a stadium with any of their own tax money. I say, I'll pay my share..The Vikings want their own new stadiunm as well too. However, the dome was built for football. All the sight lines are to the 50 yard line. You go to a baseball game and even in the best seats, you have to strain your neck to see the pitches. Also baseball is 81 home games versus football's 8. Hmmm..do the math!
There have been so many options to the City Council (liquor tax etc) and ALL have been voted down. If we lose baseball completely (which we might due to contraction and the stadium craziness) I am out of this farm state..
Laura