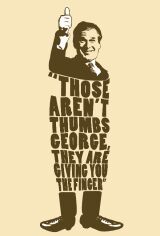 WASHINGTON (CNN) -- Growing dissatisfaction with the war in Iraq has driven President Bush's approval rating to a new low of 36 percent, according to a CNN/USA Today/Gallup poll released Monday.

Nearly half of those polled said they believe Democrats would do a better job of managing the war -- even though only a quarter of them said the opposition party has a clear plan for resolving the situation.
Posted by Lizzy at 3/13/2006 10:34:00 PM

AGain, I have to wonder: what is the lowest point to which Bush's approval rating can go?

My guess is that it wouldn't get too much lower than 30%. The nation is politically polarized to such a high degree that there would be lots of people who wouldn't vote for a Democrat even if their beloved Dumbya was having sex with a great dane on the White House lawn. I think the number of "no way would I EVER vote Democrat" voters might make up about 1/4 of the electorate.

Anyway, it has been a while since Dumbya has been above 40%. I don't see ANY way he can raise his standing at this point: he now defines the term "lame duck".

His entire presidency has been based on the World Trade Center attacks and the subsequent manipulation of fear among American voters. A majority of Americans don't like his war, they don't feel safer, and they don't like HIM. Not even another terrorist attack would help him at this point. Although it might spur him to declare martial law... heh...

Unfortunately, I have to disagree with you on this one, Snave. I think that the general public will still fall for just about anything Karl Rove cooks up. Maybe not as many as before, but there are a lot of idiots out there.

I just posted a limerick at Kvatch's Blognonymous that probably supports your assertions more than it does mine. It has to do with Condi. It's a vile poem, anyway.