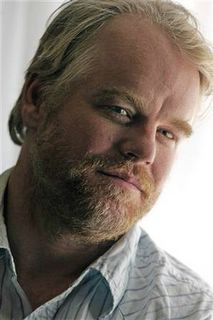 
I haven't seen any of the Oscar nominated films this year, however I do have all of them on my Netflix Queue.

I think this year's telecast will be a good one. Jon Stewart (hopefully) won't pull any punches.

The person I'm rooting for the most tonight is Philip Seymour Hoffman. I think he's one of the very best actors working today. From playing Scotty in Boogie Nights to the creepy Allen in Happiness to Truman Capote, he is a true chameleon. He is a real actor...not a movie star.

I would also like to see Felicity Huffman win for Transamerica, and George Clooney win for any or all of his three nominations.
Posted by Lizzy at 3/05/2006 05:41:00 PM

I agree, both on your post and your comment! I was sort of surprised that Reese Witherspoon won. But I haven't seen any of the films, either.

We have excellent taste.

Still think Hoffmans been due for a long time loved him in Boogie Nights and Punch Drunk Love.