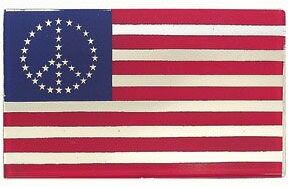 Your supposed Thomas Jefferson quote-"Dissent is the highest form of Patriotism"-, is not a 230 year old Jefferson quote at all, you ignorant liberal moonbat, it's a 2 year old Howard Zinn quote!

That pic was of a Northern Sun bumper sticker. If you have a problem, take it up with them.

However, your extreme hostility and anonymous status speaks volumes about you. What are you so afraid of? Is the truth about what this country has become starting to sink in, and you're just lashing out? Hummm, I wonder...

"Take it up with them"

Just like an irresponsible liberal: it's someone else's fault. I'm sick of poorly educated jerk-offs that suddenly have a voice in the blogosphere. YOUR blog supports A LIE, and I'm calling you on it.

I posted anonymously because whenever I've tried to debate with liberals, they spam my site, and I'm tired of it.

And trust me, you dried up old hippie pukes are getting nowhere. You are has-beesn from the 60's with tired old ideas and the same old shit-for-brains slogans.

Bullshit champ, you just can't put your name or your views to the flame - cowboy up fucktard.