Bush's speech was a resounding flop 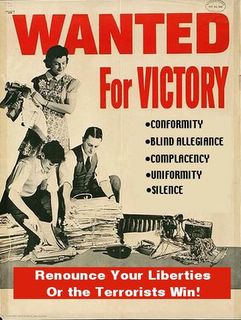 Poster from The Propaganda Remix Project

AFTER THE FIREWORKS: BUSH'S SPEECH WAS A DUD

The reviews are in: President Bush's speech this week was a resounding flop. His failure to offer the nation anything more than stale rhetoric and tired, disavowed links between the war in Iraq and the September 11th attacks was received with disappointment and skepticism by editorial boards and veterans across America. While President Bush refused to provide real answers or a clear path to success in Iraq, Democrats will continue to press for answers, will continue to fight to ensure our troops and their families have the resources they need, and will continue to encourage the president to stop exploiting the memory of September 11th for political gain.

Editorial:"[A]s usual, the rest of his speech was laced with platitudes and falsehoods. The most offensive was the use of 9/11 to justify this war. Frankly, we're tired of it. And it seems most Americans are tired of it, too.""Bush's Last Stand On Iraq? Speech Will Ring Hollow When Casualties Hit 2,000" Philadelphia Daily News, 6/29/05]

Staff Writer Tom Bowman: "President Bush stood before hundreds of soldiers last night and tried once more to connect the Iraq military operation to the Sept. 11 attacks, a time of national unity that has evaporated in two bloody years of fighting since Baghdad fell. Bush referred six times to the 2001 terrorist attacks, even though an independent commission found no link between Saddam Hussein and the attacks, nor any connection between the former Iraqi dictator and Osama bin Laden, the 9/11 mastermind."["Bush Offers Vision On Iraq, But Facts Seem To Differ" Baltimore Sun, 6/29/05]

During his speech, President Bush disappointed Americans. Instead of offering the American people a clear path to success in Iraq, President Bush returned to the same defensive and discredited rhetoric. The American people, and most especially our troops, who are serving with great courage, deserve better than discredited, shopworn political rhetoric from their Commander-in-Chief.

President Bush clearly linked the 9-11 attacks with the war in Iraq, implying that Saddam Hussein was involved and responsible for September 11th. However, the President himself was forced to disavow this link in September of 2003, after Secretary Rice and Rumsfeld stated there was no connection. Instead of offering the American people a clear path to success in Iraq, he returned to the same defensive and discredited rhetoric. Patriotism and love of country does not demand endless sacrifice on the part of our troops. The American people deserve honest leadership and honest answers.

Reagan Aide David Gergen "Offended" by Repeated Mention of 9/11. "I was troubled and offended by the regularity of coming back to 9/11, because as you say, none of the terrorists were linked to Saddam and there has been this myth for a long time that is not true that Saddam is somehow responsible for 9/11..." [CNN, 6/28/05]

WHITE HOUSE FORCED TO ACKNOWLEDGE THERE WAS NO LINK BETWEEN 9/11 AND SADDAM HUSSEIN IN SEPTEMBER OF 2003...

Donald Rumsfeld: "I've not seen any indication that would lead me to believe that I could say that [Saddam Hussein was involved in the September 11th attacks]." [CNN, 9/16/03]

...BUT NOW BUSH IS RETURNING TO DISCREDITED RHETORIC


From Lizzy: We can only hope that the newly elected Democrats that unseat the Repubs in 2006 have the balls to bring up the "I" word. There has never been a more appropriate thing to do. GWB is the worst president ever...his whole admin should be prosecuted for war crimes and jailed.
Posted by Lizzy at 7/03/2005 09:42:00 AM

Even people from his own party are starting to get weary. For his approval ratings to be as low as they are (low 40-percent range) his own supporters have to be getting fed up. Just think of how much of a flop he will be by 2008.

But he is the GREATEST president in terms of foreign policy EVER. The Muslim cancer has been creeping across the world for decades now. 9/11 was the kick in the teeth this country needed to get off its ass and this president was the wrong one to piss off. He doesn't give a shit about Europe or the U.N. or public opinion, and that is what makes him unbeatable. You may not like him, but guess what?...he doesn't care!...BWAHAHAHHAHAHA!!!