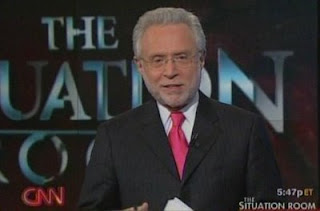 I was going to write a post on how CNN has become unwatchable, but I decided that wasn't fair. While CNN is flawed in many ways, the main issue I really have with them is Wolf Blitzer. He needs to be replaced.
I have been watching The Situation Room almost every day since it premiered a few years ago. If it weren't for Bill Schneider and Jack Cafferty's segments, I would stop watching it.
Blitzer tries to hide his Republican slant by using a monotone voice, but the more I watch him, the more I see right through it, and I'm not alone. Media Matters has reported on this, as well.
MSNBC has become a far superior network, although they do air shows like "Lockup" and "To Catch a Predator" way too much. Also, putting David Shuster on permanent leave for what he said about Chelsea Clinton is going overboard. I'm sure he's learned his lesson, so bring him back already. He's a great reporter.
It would be in MSNBC's best interest to go to 24/7 news.

I agree, MSNBC is much better than CNN these days. I still have a hard time believing they picked up Glenn Beck.

I know! Glenn Beck is a nutbag. Why is he on CNN? He's a perfect fit for FOX.

How about all that blatantly sexist stuff Chris Matthews said about Hillary? He ought to stuff it a bit more.

I don't trust any of the corporate media.