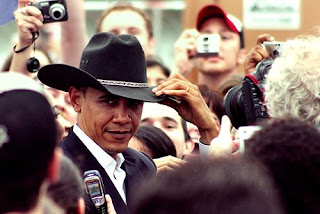 I got the heads up on this story from Polishifter's blog.

Please widely distribute. This is not being reported in the MSM.

DALLAS, Feb. 21 (UPI) -- The Secret Service told Dallas police to stop screening for weapons while people were still arriving at a campaign rally for Barack Obama, a report said.

Police stopped checking people for weapons at the front gates of Reunion Arena more than an hour before the Democratic presidential hopeful appeared on stage Wednesday, the Fort Worth (Texas) Star-Telegram reported.

Dallas Deputy Police Chief T.W. Lawrence -- who heads the department's homeland security and special operations divisions -- told the Star-Telegram the order had been intended to speed up seating of the more than 17,000 people who came to hear the candidate speak.

Lawrence said he was concerned about the large number of people being let in without being screened, but that the crowd seemed "friendly," the newspaper said.

Several Dallas police officers -- speaking on condition of anonymity because the order came from federal officers -- told the newspaper it was worrying to see so many people get it without even a cursory inspection.

The Star-Telegram said the Secret Service did not return a call seeking comment.

"The crowd seemed friendly" -- see, there's nothing to worry about.

I hate to sound like one of those conspiracy fanatics, but this story is very worrisome. And very believable.

There's another follow up story in the Star Telegram lizzy

"Others said they had recently attended large political events, many for Obama, where security screening was halted. Jeremy Dibbell of Boston said in an e-mail that he attended an Obama event in Boston at which "the same thing happened there. We waited for hours in line as people were screened, and then suddenly everyone was just allowed in without going through any inspection at all.""

This is complete bullshit. Be it a lapse in judgement or done purposefully, it doesn't matter. it needs to stop.

It is starting to get more play on the radio...Thom Hartmann, Randi Rhodes, and Rachel Maddow all mentioned it. I first heard it on Mike Malloy and I could have sworn I heard someone mention it on MSNBC.

But no matter, people need to be aware so that public scrutiny will keep these Secret Service boneheads from doing it again.

The conspiracy theory I've read suggests that an Obama assassination will lead to the type of civil unrest that will allow Bush to declare martial law, making this whole election season irrelevant.

This is all too horrible to comprehend. I just hope that Obama's people are making sure that he is protected now.

I'm glad that this story is finally getting out there. It can only help.

Hi Lew, the parallels I have heard is Obama is JFK and Hillary is LBJ

If Obama is assassinated I think it will be all but over for America. Fascism will take over and the politics of fear will reign supreme.