Most of my neighbors on my block are Democrats. I know this by the large amount of Kerry lawn signs and bumper stickers I saw during the last general election in my neighborhood. However, there is one woman on my street that is a Christian Evangelical Republican. Several years ago, her young daughters caused quite a stir when they attempted to proselytize the Jewish kids next door. That didn't go over so well...to say the least.

To this day, this woman still has a Bush/Cheney 2004 sticker on her car.

Her husband is very nice. He is an Independent, and always takes the time to chat with me when I walk Norman & Stella past their house (unlike his wife who has never spoken a word to me. )

I ran into him at Target this morning. He asked how I thought the elections were going. I said something like it's a bit of a mess, but it could be worse.

I asked him who they were supporting. He said he liked Obama, and his wife is torn between McCain and....Obama! I almost fell over. He went on to say that she hates Hillary, but likes Barack.

I think that's it in a nutshell, folks, and that is why he must be our candidate.

Bill Maher covered this phenomenom on his last show. Here is that clip:


And, check these out: 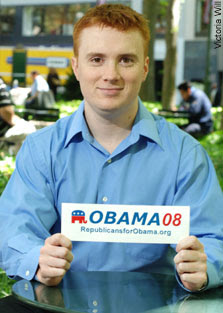 Yeah, there are some serious issues.

Obama can pull the youth vote as well as Independents and some Republicans but Hillary gets the hardcore DLC/DNC entrenched party members.

I'm sure you've heard the talk of superdelegates deciding this election. Conventional Wisdom says Hillary will get the Super Delegate vote as she is pimping out Chelsea to call them up and offer ambassadorships and the like.

(David Shuster was suspended for saying as much on MSNBC)

Still others say Obama has gotten his share of super delegates as well.

I say let the people decide.

The problem is in open primaries and caucuses, Obama wins. In closed primaries Hillary wins.

This is a real split and Hillary supporters are starting to get very nasty about it.

Between the "conservative" talkers jumping ship for Hillary if McCain's the nominee, and the plethora of Republicans for Obama, who's voting for McCain in all these primaries?
While it's sad that Bush has destroyed everything American, at least the Republican party was decimated as well.

This post is very encouraging. I've heard and read anecdotes like this all the time, about conservatives jumping to Obama.

Poli, I don't think it's gonna go to the super-delegates. Obama's got big mo -- big time.

The David Shuster thing does piss me off. People are waaaay too sensitive. Shuster is great, and the suspension should be lifted.

Good question, Lew. Who IS voting for McCain? Fiscal conservatives?

I agree with Lizzy, Obama is getting total momentum.

I'm not worried about the superdelegates...they know if they go against the will of the voters they'll end up paying for it the next time they have to run. They might be endorsing Hillary now but they can change their vote down the line.

I don't know. Obama just won two closed primaries convincingly (DC, 75-24 over Hil; and MD, 61-36). Steven Ybarra's recent letter raises serious concerns about Clinton's stronghold among Latino superdelegates AND her future in Texas. Everything I've seen from her camp since Super Tuesday points to a campaign that's looking more and more like the Death Star at the end of Episode Four. I echo Lizzy and Marquis that he'll be rolling into Texas and Ohio with as much momentum as the one that took out the dinosaurs, and I believe Hil's political career will experience an extinction-level event. Hil's not fighting to become President at this point; she's fighting for political survival, and she looks increasingly desperate by the day.

Starting to understand my "I'll never vote for Hillary" comment now?
I wasn't alone - just vocal and early.
The people that have problems with Hillary have deep real problems with Hillary and we are not all evangelicals, some like myself see her as a negative character on the political stage that has too much baggage to take this country forward when it needs to be pulled away from the reagan/bush/clinton/bush era.

America can be great, but first we've got to be good and William Jefferson Clinton showed us that when he's working for his wife - good is not what we can expect when he gets on with deliveries about fairytales and deliberate misquotes.
No the Clintons may have good intentions and they may do good works, but getting America to good is something they would not do well at.

If it goes to the super-delegates and they go for Hill, it will get very ugly. I don't see that happening. They will go with the will of the people. (They better!)

All I know is that I couldn't be happier with the way things are going for Obama.

Hillary just launched her first negative ad against Obama in Wisconsin, and there are shake-ups in her staff. Smells like desperation to me.

It’s all just a plutocratic song and dance.

I could see how older upper-income people might vote for McCain. They might see his war hero record, his "straight talk" image, and think of him as a traditional kind of guy with 1950's attitudes. They might think he would be a great guy to have a round of golf with at the country club. Other Republican voters might be voting for him simply because he represents something at least a LITTLE different, maybe better or not than Bush (and than Romney or Huckabee)... but it's almost like they aren't really all that sold on McCain. Obama has charisma oozing from every pore, and while McCain does have more charisma than a turnip, I just don't see how he has enough of it to get the votes of very many independents/moderates/lefties 50 and under.

And when those people (most of us included here) actually stop and look at the issues, and when we see that McCain really DOESN'T represent that great a change over the policies of Dumbya... Given all of Obama's momentum, should he get the nomination I have to wonder if he might actually ROUT McCain in November...

I think a lot of Democrats running for House and Senate positions would probably rather run on Obama's coattails than on Clinton's. Obama has so much more positivity about him, and if you wonder about his solutions to problems, J. Marquis posted a pretty decent article link at Major Conflict that is worth the read. All of this suggests to me that while McCain may get the GOP nomination he shouldn't get too confident.

Great news that a lot of Republicans like Obama too. He DOES represent something different than Bush. That is what I think our country sorely needs... whoever is the least like Bush is who I want in the White House.