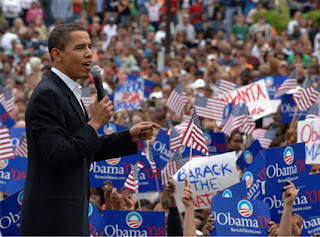 Another reason I support Barack Obama for President.

While I still like Edwards' policies the best of the remaining three (viable) candidates, I think it's Obama that would, by far, have the most impact for us as a nation when it comes to fixing our image with the rest of the world.

I don't remember where I read or heard it, but someone was explained just how Obama's face & name speaks louder than anything anyone can say. Imagine a child in the middle east catching a glimpse of the new American President on TV, and he looks a little like him.

Here's an article that Poli posted a few weeks ago on his blog. I can't pass up reposting it here, since I am the OCD Gen X Liberal:


Why Obama Is Relevant

Generation X, it's our turn

Ask a Barack Obama supporter to recall his or her "Obama moment," and it's like hearing about a first kiss.

They all seem to remember the precise instant they knew. "It was his speech at the 2004 convention," says Jason Sawatzki, 32, a lab tech at Edmonds Community College. "Everything about it was different from the bitterness I've been hearing my entire life."

"For me, it was last February, when he kicked off his campaign," says Digvijay Chauhan, 40, a Redmond tech entrepreneur who came from India in 1991. "I'm not ashamed to say I had tears in my eyes."

"I was done with politics until I heard him," says Mary O'Barr, a Seattle nurse whose political roots go way back (her father was a JFK delegate). "I've felt like our politics is killing us. Then he comes along."

If all this sounds a little cultish, well, I'd say it's more polite to call it a movement. Either way, it is for real.

Obamamania is about a bunch of different things. Such as rejecting special-interest-driven partisanship. And erasing tired racial categories.

But it also has the feel to me of a once-in-a-generation shift.

The message: Baby boomers, you're out. You've had your chance.

Remember Generation X? What author Douglas Coupland called my age group, the crowd cursed to live with no identity in the shadow of the boomers for eternity?

What I hear in the Obama movement is that it's our turn now.

Obama is 46. I am 42. We were born near the end of the baby boom, but more importantly, too late to be grounded in the cultural or racial fights that dominate politics.

Most of my life, politics has seemed more about the past than the present. Especially after the Cold War ended.

"I sometimes felt as if I were watching the psychodrama of the baby boom generation — a tale rooted in old grudges and revenge plots hatched on a handful of college campuses long ago — played out on the national stage."

Exactly. It explains how the 2004 election could be about a 30-year-old war, Vietnam, instead of the war we're in.

Can we please move on? That's what the Obama movement is saying.

Even some Obama baby-boomer supporters feel it. They say that after the social achievements of the '60s, they're now ashamed of the debt, corruption and corporatization of politics that is also one of their legacies.

"My generation is not leaving the nation in good shape," says Marsha Scutvick, 57, of Mill Creek. "We can keep going down that same road. I think it's time to try something new."

Not much has been asked or expected of my generation. We haven't led. Other than with the Internet, we've made no real blip of change. We're arguably every bit as narcissistic as our elders.

Obama is saying: Here's a chance to erase that "X." Cleaning up after the baby boomers still leaves us obsessing about them. But it's such a mess that somebody better do it.

Thanks for posting this, Lizzy.

I remember my "Obama moment" - it was the convention speech. This movement is like nothing ever seen before. He doesn't take PAC money, yet raised enough dough to run a national campaign from people sending in $5, $10, and $20 at a time! Extraordinary.

I really like Senator Obama and if he can get the nomination I'll give him serious consideration.
But he will have to get that nomination without me for reasons I've stated before.
He certainly could get my vote for not being a liar but that's not a reason for getting my vote, liars lose my vote but honest people don't automatically get it for being lied about.
John can't engage, Hillary can't tell the truth, Barack is the only hope left for the Democratic party - by default.
I don't vote by default.

Obama seems to me like the Democratic candidate who generates the most excitement and the most hope for the possibility of positive things to happen. I see him as a candidate who will get young people involved in our political process. I honestly believe Edwards is getting the shaft from the media... but if he can't be the nominee, I sure hope it is Obama.

This comment isn't in response to your blog/post, but your entire blog really. I'm particularly fascinated by the comment under the "About Me" section where you state: "Politically, I consider myself a far/hard left liberal who will fight against the right wing to my dying day."

I'm curious to know why? This is a serious inquiry. I'm not looking to stir up trouble, but rather initiate an open, honest dialogue; hopefully, devoid of the tiresome rhetoric.

Would you provide a further explanation of just why you hold your views?

Candace, I remember that moment well. That was the moment I looked at him and thought, this man could be President someday. It was awe-inspiring.

1138, So if the choice is between Obama & McCain, you're gonna vote for McCain?

Snave, I agree. Edwards is getting the shaft big time. I'm hoping he does better than expected tomorrow. I think he might.

"liberal demise", I never had a problem with Repubs until Ronald Reagan was elected. He brought the Repub party wayyy too far to the right.

The incident that sticks with me the most is when Reagan didn't fund the AIDS epidemic in it's infancy because it was a "gay problem." Now look where we're at.

I think there are still some good Repubs out there, but on a whole, the party has been taken over by a bunch of homophobic, racist, science-denying scumbags.

I am a far left liberal because it's time to swing the pendulum back before it's too late for our environment, safety, health, education, etc, etc, etc.

Does that work for you?

As one of those #@$%&!$ Boomers, I agree it's time to let Gen X have a chance. We've had 16 disappointing years of having a Boomer in the White House. (Clinton was OK, but mostly he just looks good in retrospect because of the current shitstain stenching up the White House.)

My "Obama moment" wasn't one of great warmth, or passion, or about hope for the future, or at least, not initially. Frankly, all three Democratic Party candidates were peddling that, and two (Obama and Edwards) were actually believable. I looked coldly, dispassionately at his positions, and while I disagree somewhat with his fiscal policies, and also given that I cannot support anyone in the current GOP field because of Obama's similar superiority on civil liberties issues, I ended up deciding on him. A criticism I have common to both the GOP and the Democratic Party and their major candidates, he doesn't ask himself if the federal government SHOULD do something instead of if they CAN do something nearly enough, and he's a bit too bullish on ethanol. That said, I initially came to the conclusion that he's far more than adequate to become the next president. This was not "choosing by default." This was evaluating my options, weighing and measuring them, and choosing a candidate I could believe in, regardless of any disagreements I have with some of his positions, because the commonalities between his beliefs and mine are strongest on the issues about which I care the most.

It was only later when I started actually listening to his speeches, since I did that last given my strong bias for the written word, that I started to realize just how remarkable he is, so I guess I did have an "Obama moment" after all. It just occurred after I had already decided to give him my vote.

Well, first let me say, "thanks" for taking the time to respond.

Second (to jump right in), I obviously disagree with your comment about Reagan taking the R-party too far to the right. I believe if you check historical archives, a vast majority of the country agreed with his stance on many (not all) different issues, even to the point of those states which are/were typically "blue" voting for him.

That having been said, I will agree (of course, looking backwards now), that the statement about AIDS being a "gay problem" was shortsighted. However, 25-30 years ago, there was sufficient evidence to theorize the disease was transmitted due to behavioral habits (which is true...but is not the ONLY true fact). With hindsight being 20/20, who's to say what R&D could have discovered, but there's no guarantee we'd be any closer to a cure now had he supported funding then. So, I don't believe looking at where we are now bears a lot (some, yes) of relevance. Many other diseases, both those with, and those without, government funding have made measured progress. It's difficult to judge "what if's."

I'm glad you recognize “there are still some good Repubs out there.” And, I hope, that recognition would extend to those of us who don’t claim to be Republicans, but rather conservatives. But I find your assessment of the R-party to be nothing more than the very rhetoric I was hoping to avoid. I mean, seriously, your commentary is nothing more than a generalization couched in the same intolerance of which you’re accusing the Repubs. I’m not trying to be offensive here, so please don’t take it that way. I’m trying to discover why anyone would adhere to a liberal philosophy. Could you provide some specifics (with out the name-calling)?

I would REALLY like to understand why you’re “a far left liberal” believing “it’s time to swing the pendulum back” (backwards in my mind), and why you believe it could be “too late for our environment, safety, health, education, etc, etc, etc.” If you could explain your reasoning further, that’s what would work for me. Thanks.