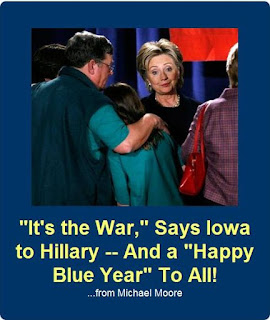 Another great letter from Michael Moore:

There was no doubt about it. The message from Iowa tonight was simple, but deafening:

In short, if you had something to do with keeping us in this war for four-plus years, you are not allowed to be the next president of the United States.

Over 70% of Iowan Democrats voted for candidates who either never voted for the invasion of Iraq (Obama, Richardson, Kucinich) or who have since admitted their mistake (Edwards, Biden, Dodd). I can't tell you how bad I feel for Senator Clinton tonight. I don't believe she was ever really for this war. But she did -- and continued to do -- what she thought was the politically expedient thing to eventually get elected. And she was wrong. And tonight she must go to sleep wondering what would have happened if she had voted her conscience instead of her calculator.

John Edwards was supposed to have come in third. He had been written off. He was outspent by the other front-runners six to one. But somewhere along the road he threw off the old politico hack jacket and turned into a real person, a fighter for the poor, for the uninsured, for peace. And for that, he came in a surprise second, ending up with just one less delegate than the man who was against the war from the beginning. But, as Joshua Holland of AlterNet pointed out earlier today, Edwards is still the only front-runner who will pull out all the troops and do it as quickly as possible. His speech tonight was brilliant and moving.

What an amazing night, not just for Barack Obama, but for America. I know that Senator Obama is so much more than simply the color of his skin, but all of us must acknowledge -- and celebrate -- the fact that one of the whitest states in the U.S. just voted for a black man to be our next president. Thank you, Iowa, for this historic moment. Thank you for at least letting us believe that we are better than what we often seem to be. And to have so many young people come out and vote -- and vote for Obama -- this is a proud moment. It all began with the record youth turnout in 2004 -- the ONLY age group that Kerry won -- and they came back out tonight en force. Good on every single one of you!

As the only top candidate who was anti-war before the war began, Barack Obama became the vessel through which the people of this Midwestern state were able to say loud and clear: "Bring 'Em Home!" Most pundits won't read the election this way because, well, most pundits merrily led us down the path to war. For them to call this vote tonight a repudiation of the war -- and of Senator Clinton's four years' worth of votes for it -- might require the pundit class to remind their viewers and readers that they share some culpability in starting this war. And, like Hillary, damn few of them have offered us an apology.

With all due respect to Senator Obama's victory, the most important news out of the caucus this evening was the whopping, room-busting turnout of Democrats. 239,000 people showed up to vote Democratic tonight (93% more than in '04, which was a record year), while only 115,000 showed up to vote Republican. And this is a red state! The Republican caucuses looked anemic. The looks on their faces were glum, tired. As the camera followed some of them into their caucus sites, they held their heads down or turned away, sorta like criminals on a perp walk. They know their days of power are over. They know their guy blew it. Their only hope was to vote for a man who has a direct line to heaven. Huckabee is their Hail Mary pass. But don't rule him out. He's got a sense of humor, he's downhome, and he said that if elected, he'd put me on a boat to Cuba. Hey, a free Caribbean vacation!

Bottom line: People have had it. Iowa will go blue (Happy Blue Year, Hawkeyes!). Whomever your candidate is on the Dem side, this was a good night. Get some sleep. The Republicans won't go down without a fight. Look what happened when Kerry tried to play nice. So Barack, you can talk all you want about "let's put the partisanship aside, let's all get along," but the other side has no intention of being anything but the bullies they are. Get your game face on now. And, if you can, tell me why you are now the second largest recipient of health industry payola after Hillary. You now take more money from the people committed to stopping universal health care than any of the Republican candidates.

Despite what your answer may be, I was proud to sit in my living room tonight and see you and your family up on that stage. We became a bit better tonight, and on that I will close by saying, sweet dreams -- and on to that other totally white state of New Hampshire!

Once again, Mr. Moore dishes up the truth to anyone with the constitution to swallow it. No wonder all those people living the lie hate him so!

Michael Moore is my hero.

It is still the war despite what the media says.

What a bunch of toads.

While they crap on immigrants and display war bravado they keep alienating Americans more and more. Which means while they may earn the Repug party nod by talking up Iraq and trashing immigrants, they won't be able to win the Presidency.

I hope you're coming to Mpls in September to protest with me at the Rethug convention, Poli.

The last sentence of Poli's comment couldn't have said it any better.

You should come, too, Snave. I have a big house.