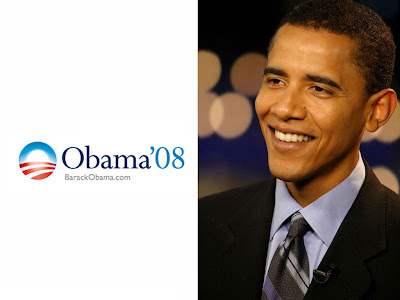 While Barack wasn't my first choice, I'm thrilled with his win in Iowa. In fact, his acceptance speech brought tears to my eyes. I'm literally choked up.

The winds of change are here.

Yeah, that's cool. If he wins in New hampshire I think his momentum might be unstoppable.

And although Hil got one more delegate than Edwards due to some arcane aspect of Iowa caucuses, Edwards was still #2 in the voting. I won't say this is a knock-out punch for Hilary's campaign, but it's a solid blow to the solar plexus. The GOP is simply not going to win in November, so The Hick's win doesn't entirely bother me, although I would have been happier with a Romney or McCain win. I think Rudy needs to just get out now, and I wouldn't be surprised to see Richardson bow out in the coming days, perhaps before New Hampshire.

Lizzy, I am SO pumped! On to New Hampshire!

I've been walking on air all day! I agree with you, J, I think he's unstoppable, as well. If the results had been tighter, I wouldn't think so, but he really kicked ass.

Obama represents something that is greater than himself. He represents the optimism this country desperately needs.

MC, I can't wait until Hilldog drops out!

I wish Romney had won because he's easily beat, but Huck shouldn't be too much of a problem.

Great news about Obama taking Iowa. I haven't picked a favorite candidate yet; I've always liked Obama but I figured a minority person wouldn't get elected. But maybe he's enough of a unifier to get himself elected.

Actually, I think Huckabee would be easier to beat than Romney because of his stunning lack of crossover appeal. He only won Iowa by taking 49% of the evangelical Christian vote versus Romney's 19%, and in New Hampshire, the evangelicals won't be too much help. I've posted my own analysis, but I may amend it before Tuesday. This was also a stunning defeat for Edwards, because Iowa was the state he was most likely to take.

I must admit that I'm of two minds on the Obama win: I'm not sure if I'm happier that Obama won, or that Hil lost, and badly. Then again, I might as well ask myself which part of a Twinkie I like more: the cake or the filling? The answer to the Twinkie question is just "yes", and I suppose that's ultimately my choice on the aspect I'm happier about between the Obama win versus Hil loss.

I'm with Tom Harper, I haven't pick anyone as a favorite.

I must congraulate Obama for his win in Iowa.

I have gravitated toward Obama more and more. I truly believe it is his time.

I agree with MC, Rudy needs to bow out, and Richardson probably will.

I think Obama gives Americans a reason to believe they can once again really, genuinely be proud of the people who run our country, particularly those in the White House. He is about so much more than individuals and so much more about the common good and uniting the country that I could just crap my pants out of sheer delight.

Oops! Better head to the can! HEh!