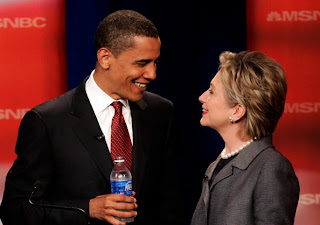 An African American or a woman is going to be our Democratic nominee. We've come a long way, baby.

No matter what you think of them or their policies, you do have to take a moment to embrace this historic event.


...and when that feeling is over, don't be like me and let an overwhelming sense of dread set in. Did we blow it? Are we completely overestimating our country's tolerance level? Is our country really truly ready for this? Is it too late for Gore to step in?
Posted by Lizzy at 1/31/2008 05:49:00 PM

I was having a conversation with an old friend the other day and he was scared the country just wasn't ready to elect a woman or a black guy. I said there's never a good time for these things...you just have to charge into the fray and make the history happen.

Ann Coulter has stated that she would support Hillary, if McCain is the Republican nominee.

So just maybe we are headed in the right direction.

If McCain and Clinton are the best the War Party can offer up, than I'm hoping Nader runs again because there is no way either one of them are going to do any good (or have done any good )for the US at home or abroad.

Yeah, Nader. Good idea. Why don't you just send a thousand dollar check to the McCain campaign while you're at it?

F#$% Nader. I want the Far Right to run a third party candidate who siphons millions of votes away from McCain.

LT, Not that I care what Coulter has to say, but I wonder if would say the same thing if Obama's the nominee.

Lew, How about Obama? I believe he would do our country great good abroad, and at home. I like Nader, too, but please, don't go that route. Remember 2000?

Tom, That would be a wonderful thing.

Coulter supporting Clinton over McCain shows you how unLiberal Clinton is, not how liberal McCain is.

If McCain and Obama were the nominee's then Coulter would be returned to the dustbin of social and political relevancy.

JM needs to learn to relax just a bit, most voting Americans don't even know who Nader is anymore.

Hey, the short-sighted pinheads who voted for Nader in 2000 helped make the Dubya era possible. That's not something I'm likely to forgive anytime soon.

JM
The only people you can blame for the election of Bush are the people that actually voted for Bush anyone else voted their conscience and exercised a constitutional right.

Gore did a shitty job to have the margin of error be a nut job like Nader.
And it's a loser attitude that still calls it that way all these years later.
You might want to point some righteous anger at the supreme court however.