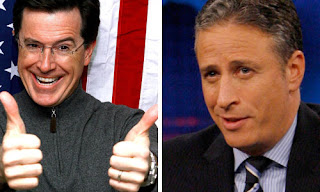 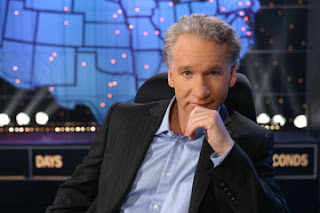 While I have mixed feelings about Stewart, Colbert and Maher returning to TV during the writers strike, I have to say, I'm glad they're coming back. They have been sorely missed.

I will be tuned in. It's too bad the writers haven't been able to reach agreements, but I'm tired of repeatedly listening to my Colbert and Stewart audiobooks and watching my Colbert DVD.

The whole situation is unfortunate.

I still think the networks and production companies are being greedy bastards for not wanting to give the writers an extra 2 cents on downloads.

How much fucking money is enough? Jesus, these people make billions.

Anyway, I am sad the TDS and Colbert haven't been on the air because they haven't had the chance to help influence the election. Their input is badly needed at this point.

I don't know who own's the show but I don't like them coming back without the writers. People should pe paid for their work and what the network is doing is theft.

I must agree with 1138 on this call. I would love to have the shows back, but let's be fair.

I'm watching the midnight repeat of TDS now. Stewart is doing alright, but man, let's get those writers back.

I'd pay them whatever they want.

Colbert's interview with Andrew Sullivan was excellent. If you didn't catch, look for it on the Internets.