I was worried about Lew. I had visions of him being taken away in the middle of the night...and we were next. (He's just taking a break.) 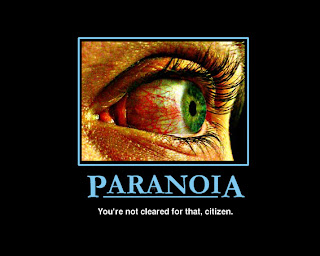 Am I paranoid? Yep.

"It isn't paranoia...if they are really trying to get you." - Author unknown

"No matter how paranoid I get, it's never enough to keep up." - Author unknown

"When everyone is out to get you, paranoia is only good thinking." - Author unknown

"Paranoia is knowing all the facts." - Woody Allen

"This is the Nineties, Bubba, and there is no such thing as Paranoia. It's all true." - Hunter S Thompson

Glad to hear Lew wasn't taken away by Black Helicopters and that he's not rotting in some CIA black site prison over seas.

While I wasn't taken away for some extraordinary rendition, I was relegated to network television as my news source, which is akin to torture.......

I figured Lew had probably just gotten burned out with his blog, or that maybe he was just way too busy to sit around picking at his pimples as he stared at his PC. But nowadays, one never knows. It's true, in our punitive culture he COULD have been off in some deluxe concrete cell in Algeria or Bulgaria or somewhere, learning about the new American sport of waterboarding.

Very glad to see you have resurfaced, Lew!

Sometimes paranoia's just having all the facts.
- William S. Burroughs

A paranoid is someone who knows a little of what's going on.
- William S. Burroughs

After one look at this planet any visitor from outer space would say 'I want to see the manager.'
- William S. Burroughs

Most of the trouble in this world has been caused by folks who can't mind their own business, because they have no business of their own to mind, any more than a smallpox virus has.
- William S. Burroughs

Which came first the intestine or the tapeworm?
- William S. Burroughs

Your mind will answer most questions if you learn to relax and wait for the answer.
- William S. Burroughs

And then there's the t-shirt with "Help! The paranoids are after me!" on the back. Both you and Snave posted about paranoids today. Coinkydink? I think not!

Great quote from Hunter Thompson. Too bad he isn't around any more; he'd have some choice words to describe what we've deteriorated into.

So glad you're back, Lew! I'll be commenting on your blog later today.

I knew Poli's paranoia was slightly worse than mine, but I'm glad I'm not alone. I do think we have good reason to be paranoid these days.

Candace, I must get that t-shirt!

Tom, Yep, Hunter had it right back then, and he would have choice words if he were still around today.

Thanks for the excellent Burrough's quotes, Snave. He's another one that we could use right now.

Bah, maybe Hunter S. Thompson just got out while he could still tolerate the world. Much like Buddhist monks during Viet Nam, he took himself out and left us to deal with the world's shit. Bah.

I thought of that, too, MC. I think you're right.