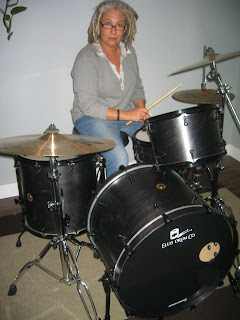 I started playing drums in the eighth grade. Later, I played the snare drum in the marching band in high school...which actually kinda sucked, because that meant I had to go to all the games and pep rallies. Being a little punk rock girl; I wasn't exactly friendly with the athletic and cheerleader types.

Back in the day, my best friend Michelle and I almost started a band. We were going to be called "Jungle Rot," but alas, it was not meant to be.

In my 20's, I sold my drum kit to my neighbor -- semi-rock star, Peter Himmelman.

Now that I'm in my 40's and around musicians a lot, I've got the bug to play again.

I bought an excellent used drum kit from a friend of mine, and with practice, a few lessons from drummer friends Cookie and Pat, I should be good to go.

I agree with Candace, Do it!

I wish I were back in Minneapolis to be your lead screamer and rhythm guitar player. I can play barre chords and can be all right if I practice a lot. We sure had a lot of plans back then!

I knew you rocked, Lizzy but I never realized YOU ROCK.

Candace, "Jungle Rot" would have been our band name in the early
80's, but it wouldn't quite fit now.

Meesh, I wish you were here, too. I could sure use your special screaming skillz because I certainly can't do it.

Any ideas for band names anyone?

Thats going to be a lot of fun!

As soon as I get my sound proof room I'm getting a drum kit as well to go with my guitars. Then I will finally be able to play what I like: LOUD

Lizzy, yeah that dawned on me later :) Guess I was in a time warp...

Okay, um, there's gotta be some kind of rot ya get out there only in the desert sands of Iraq and Afghanistan that would make a good name. Unless you wanta use Camel Toe Rot ...

The band name should definitely have "liberal" or "left" in it. I guess there's the Hard Left, so....

Keira, That's the best one yet!

The Hard Leff is GREAT.

I would keep the name "Jungle Rot" and name your first album "Let it Rot".

I always seem to come up with fun ideas for band names, but nobody else likes them.

The Skid Trails
The Spurts
Flaming Passion
Scheisenstein
The Screeming Weenies
Idiot and the Savants
The Smoke Detectors
Have a Lousy Day
Focus On Your Own Damned Family
Shat
Shat In The Hat
The Coprophiliacs
The Defenestrators
Crap Happy
The Artificial Inseminators
Cry Baby Cry
The What
Cry of the Bunny
Don't Blame Jake (Jake is our drummer's chesapeake retriever, who farts constantly during our practice sessions)
The The (but that name was taken long ago... sigh...)

Yeah, I like The Hard Leff, too, but some of your others were great, Snave. I especially like The Spurts, Focus On Your Own Damned Family, Shat, Don't Blame Jake, and my favorite, Crap Happy.

My friend Brian (The Hard Left) was in a band called Idiot Savant!

My idea for the Idiot and the Sevants band was always for the group leader, Idiot, to be a guy with wild clothing and a huge pink or purple mohawk writhing and thrashing around on the stage, screaming wildly while the rest of the band played high-tech, fascinating music.

How about a band title that starts with the word Openly?