Being that Tom Vilsack was a DLC Democrat (like Hillary), I wasn't a huge fan, but none the less it is sad that he couldn't compete with the front-runners. 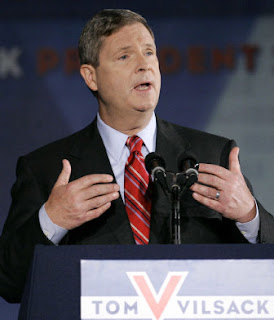 Vilsack to drop out of presidential contest

Democrat Tom Vilsack is abandoning his bid for the presidency after struggling against better-known, better-financed rivals, two officials told The Associated Press on Friday.

Vilsack was scheduled to make a formal announcement later in the day. The officials spoke to the AP on condition of anonymity to avoid pre-empting the former Iowa governor's statement.

Vilsack left office in January and traveled through states holding early tests of strength, but he attracted neither the attention nor the campaign cash of his top tier rivals — Sen. Hillary Rodham Clinton, Sen. Barack Obama and John Edwards.

In the most recent financial documents, Vilsack reported raising more than $1.1 million in the last seven weeks of 2006 but only had around $396,000 cash in the bank. Some campaign finance experts contend the candidates will need $20 million by June 2007.

I believe we are going to start to see the Democratic field drastically change in the next few months. I'm still leaning toward Obama, but does he really have the experience or the clout to beat Hillary? Does anyone?

BTW - Awsome blog!
I really dig your brashness and point of view

Vilsack gone? Is anyone other than himself and his immediate supporters surprised?

Thanks, reckoning force. I really appreciate that. I'll check out your blog, as well. Despite his lack of experience, I believe Obama can beat her. I wouldn't rule out Edwards either.

1138, I know I'm not surprised. It's only a matter of time before Dodd, Biden, and some of the others do the same.

I hope some of the others to leave include Hillary.

There are points to being in the race aside from wanting to be President one is to get your issues into the party platform.
Vilsack didn't have any, Hillary with the power she has in her fat wallet unfortunately may be able to call the shots on who gets the nomination, even if it isn't her.