No doubt. Al Gore should run for Prez

Al Gore being nominated for the Nobel Peace Prize is the best news I've heard in quite some time. First the Oscar nomination, and now this. Very, very cool. 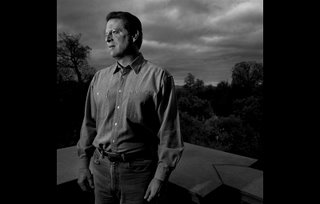 And the Nobel Peace Prize goes to ... Al Gore?

He 'has put climate change on the agenda,' two Norwegian sponsors say

OSLO, Norway - Former Vice President Al Gore was nominated for the 2007 Nobel Peace Prize for his wide-reaching efforts to draw the world’s attention to the dangers of global warming, a Norwegian lawmaker said Thursday.

“A prerequisite for winning the Nobel Peace Prize is making a difference, and Al Gore has made a difference,” Conservative Member of Parliament Boerge Brende, a former minister of environment and then of trade, told The Associated Press.

“Al Gore, like no other, has put climate change on the agenda. Gore uses his position to get politicians to understand, while Sheila works from the ground up,” Brende said.

Al Gore is getting quite the resume!

I don't think he'll run for president...unless the world has a lot of climate change-related catastrophes between now and the election and the public talks him into it.

I'm also glad he was always against the Iraq war...that's a big plus for any potential candidate.

I'm so pissed off at this "New Blogger" crap I could just about scream. I wrote what I thought was an excellent comment, then it wouldn't let me sign in, and then it took me away from your comment section and into something completely different. Ack!!!

Anyway, I think Gore is doing a fantastic job. It will be interesting to see how the idiots among the right respond. They will probably make fun of the Oscar nomination because they like to push the "horrible Hollywood" thing, and they will see it fitting that Gore's film should get nominated because it promotes what they want people to think is crackpot theory.

The Nobel nomination will be made fun of, but in this case it would be because the wingnuts believe the Orwellian "War is peace" thing. None of them could ever get nominated for a Nobel Peace Prize because they don't know what peace is... thus this nomination will make them jealously angry.

To me, Gore is the picture of dedication, of conviction, and of demonstrating purpose. I think he could help the country heal. I would love to see him run for president, get the nomination, and choose Obama as his VP. As a team, I believe they would be unbeatable. They would stomp all over a war nut like McCain, or a religious nut like Brownback.

Every time I voted for Clinton I said, "I wish it was Gore".

There's a new U.N. report out that concerning global warming, it may already be too late to save most of us and possibly even the planet.

That next generation that we were worrying about cursing ours?
We can stop worrying.

I don't think he'll run either, J. But, if what 1138 commented on is true, we have hit the tipping point on the environment and Gore would be the one to try to make it right again.

Snave, I can't switch to the new Blogger (yet) because my blog is too big, although I have had similar commenting problems.

Let the wingnuts try to make fun of the Nobel nomination. It will just make them look even sadder than they already are. Ha!

Gore/Obama? Sounds good to me.

1138, I used to say the same exact thing when I was voting for Clinton.

I hadn't heard that yet about the new UN report. So, we're past the tipping point? Holy crap.