Let's put this story to bed, shall we? 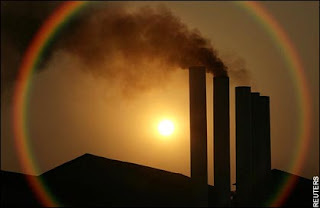 One day after Gore won the Oscar, the right-wing "press" went after him for his energy consumption, essentially calling Gore a hypocrite. It worked -- they got their sound bite out there. Of course, if they had dug a little deeper, they would have found that the reason Gore's home energy bill is so high is because it is run on GREEN energy.
Additionally, my sister, who is a bartender, told me that she overheard some of her customers talking about the awards the other night. They said that as soon as Gore won the award, they turned off their TVs. When I heard this, I gave her my standard answer: I hope these guys get sucked off this earth by a super-tornado.
These anti-science, ignorant bunch of cretins can kiss my ass.
Gore Defends Mansion's Power Consumption
(CBS News) NASHVILLE, Tenn. Al Gore, the former vice president whose documentary film about global warming won an Academy Award this week, is defending his energy use after being slammed by a conservative group that claims he isn't "walking the walk" of an environmentalist.
The group accuses Gore of using too much electricity to power his sprawling Nashville mansion.
A spokeswoman for Gore said the former vice president invests in enough renewable energy to make up for the home's power consumption. The spokeswoman said Gore purchases enough "green power" — renewable energy sources such as solar, wind and methane gas — to balance 100 percent of his electricity costs.
"Sometimes when people don't like the message, in this case that global warming is real, it's convenient to attack the messenger," Gore spokeswoman Kalee Kreider said.
Gore participates in a utility program that sells blocks of "green power" for an extra $4 a month. Gore purchases 108 such blocks every month, covering 16,200 kilowatt-hours and helping subsidize renewable energy sources.
Gore's documentary film "An Inconvenient Truth," which chronicled his campaign against global warming, won an Academy Award on Sunday.
more...
Posted by Lizzy at 2/28/2007 09:15:00 PM

Well one can say if they turned their TV's off perhaps they were just trying to conserve energy. And conserve what is left of their brains. I mean if that is all they can do to contribute to saving our environment, then thank you. Every little bit helps.

Gore could use 100X the electricity that I use, and it would still be justified by the value of his work. All that has to happen is that 1 in 100 of the people who hear his message change their lifestyle.

It's just such a pathetic anti-global warming argument.

How much energy does a hermit in a cave use?
How successful is that hermit at doing anything to improve the world by enlightening them?
Gore isn't guilty of damaging the environment any more than he has to.
His honesty about his family's involvement in tobacco growing is absolutely refreshing.

Good point, Keira! I hadn't thought about it that way. I like it.

kvatch, I agree, but hopefully more than 1 in 100 will change their ways.

1138, Absolutely refreshing, indeed. I love when a politician is honest about something others might not be comfortable with. It shows true character.

I already mentioned this on another blog in a comment, but it just proves how manipulative and dishonest the Sean Hannity/Rush Limbaugh types really are. They have been so successful at portraying themselves as authorities on issues, those people who get sucked into their shows take whatever they say as truth. When it comes to debating an issue, people like Hannity don't have to really debate, and they know it. All they have to do is come up with a sound bite, and regardless of how inane it might actually be, people will buy it and repeat it... and Hannity doesn't HAVE to say anything else. All he has to say is something like "Gore is a hypocrite because he flies all over in fuel-guzzling jets and his house has a big energy bill" and the job is done. Point made, nothing else need be said, end of argument. Next issue, please.

Hannity probably doesn't care about trying to prevent further global warming by limiting emissions, but it seems like every time his mouth opens he emits large amounts of methane. In the greater scheme of things, I would guess he is one of the world's primary sources of that gas.

"Pathetic anti-global warming argument" is right, J.! This just shows they have no real way to debate the issue when all they can rebut Gore's position with is a sound bite. This is proof that they are evading the issue and that they are CHICKEN to engage in an honest debate. It is a cheap, pathetic plan of attack, and so transparently so that it is almost encouraging to see them adopt such tactics.

The more the public sees through Bush and Cheney, the harder it is for those guys to be taken seriously. I am hoping the same will happen with the conservative talkers... the sillier and more pathetic they get in supporting increasingly unpopular stances on issues, the less the public will be as eager to drink their Kool-Aid!

Now you've got me thinking about their ratings, Snave. I wonder if there has been any drop off for Hannity & Limbaugh. O'Reilly's ratings have dipped with the emergence of Olbermann's success, so there is hope out there.

Where does one go to find out if the ratings of certain shows are indeed slipping? I would love to learn more about that, and to track Hannity, O'Reilly, FOX "News", etc. Let me know if you find out!

It's an amazing thing to sit back and just listen to the BS that some people will spew. When most people are actually quite uninformed!

I'll see what I can find out and get back to you, Snave.

Snave, I've been searching all over the Internet to find the ratings on Hannity, but so far all the info I've found is old. I'll keep looking.

1138, I'm glad to hear that you've opened the door a little on Obama. I do agree, though. He does need to take a stronger stand on Iraq.

There's a chance you qualify for a new government sponsored solar energy program.
Click here and find out if you are eligble now!