Bill is back, and Keith is here to stay 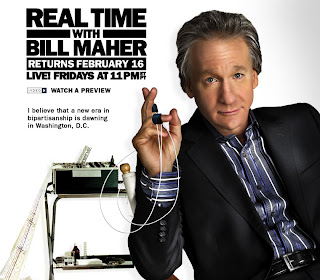 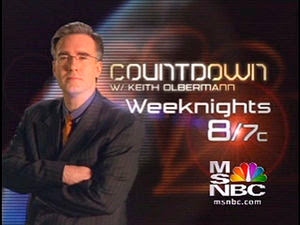 Olbermann, a former ESPN sportscaster, gained publicity last year for his feud with Fox News Channel's Bill O'Reilly and his special commentaries against President Bush's policies, particularly in regard to the response to Hurricane Katrina and the war in Iraq. "Countdown" recently has seen a strong uptick in ratings, helping lead MSNBC to the best competitive position in its history against second-place CNN.

What channel will Bill Maher be on? I hope not HBO, since we don't have that one. We have literally hundreds of channels but HBO isn't one of them. But I always loved "Politically Incorrect" and I'd love the chance to see his new show. He's one of the voices of sanity which we need.

I hate to tell you this, but it is HBO.

You should do what I do. I only subscribe to HBO when Maher's show is on. When he signs off for the season, I do too.

Politically Incorrect was one of my favorite shows, as well.

If you don't want to get HBO, you can often find some of the show's segments on YouTube. Make sure you catch the last segment when he does his "New Rules." That's always the best part of the show.

He should have put the show on Sundance.

I can't get HBO

See, this is why we need to be able to pick and choose what cable channels we want. There's something wrong when you automatically get the Golf channel or the military history channel or the drying paint channel or the monkeys flinging poop channel but you can't get HBO.

I agree, Jim. Another bonus to being able to pick & choose what we want is that we can omit channels like FauxNews.

How about that for sending a message to good old News Corp?!

I wouldn't support the HBO model even on ala carte.
If the programming is good enough they should be able to support the network on advertising... or they shouldn't run commercials.