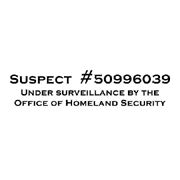 I'm sure most of you are feeling the same thing as I am. Our anger is rising against TPTB and something has to change before we are at the point of no return. My question right now is, when it comes to our blogs, what is free speech? Can we really say what is boiling within us?
Posted by Lizzy at 5/16/2005 05:57:00 PM

What's boiling in me lately is the feeling that there are people in our government who want to take away our personal freedoms, who want to infuse religion into our government, who want to widen the gap between rich and poor, who want to use the earth in ways that may be harmful to all the people, who put dollars ahead of the welfare of the people, who want to build a world empire, who want to suppress dissent, who want power, who want to neutralize competition, who believe God is telling our leaders what to do next, who believe their concepts of virtue are more important than the concepts of liberty and freedom, who will do anything to get into power and stay there, who give tax breaks to the rich in exchange for their support in elections, who want to end social programs on which millions of people depend, who would rather see pharm companies make loads of money than see all of us citizens have access to health coverage, who want to get rid of unions, who want to get rid of public schools, who think people who don't accept Jesus as their personal lord and saviour should be exiled to some remote place or else just plain executed, who want to replace the Constitution with the Bible, who change ethics rules to protect their own from prosecution, who are homophobes, who are homosexuals who profess to hate homosexuals, who blame the Clintons for everything, who blame Hollywood for everything, who equate a dissenting opinion with terrorism, who try to get rid of a system that has worked in the Senate for 217 years just so they can stay in power, who want to infuse our federal judicial system with fundamentalists, who want to replace current Supreme Court justices with fundamentalists, who spout the term "family values" without consideration of its definition, who want to change Social Security by wrecking it, who want to decrease the amount of money the government takes in so they can cause social programs to be cut due to not enough money, who support the death penalty, who value a fetus more than a child or an adult, who push for the use of voting machines built by GOP-friendly companies, who fix elections, who continue to support mergers than concentrate things like the press, newspapers, TV and radio, and oil in the hands of fewer and fewer people, who would rather drill for oil in a wilderness than develop alternate fuel sources, who would allow a father who impregnated his daughter to sue an abortionist if the daughter went ahead with the abortion, who think it's o.k. for every American to have military-style assault weapons, etc. ad nauseum.

There, now that was nice and focused, eh!! 8-)> I guess the task for me would involve creating a laundry list of all the things that make me nuts about the GOP, and then see what kind of common threads run throughout the list. I will have to work on this. There are so many things that make me pissed about the Republicans that it gets hard to concentrate and discern sometimes!

Oops! I left out Mallard Fillmore, columnists Linda Chavez, Mona Charen, George Will, Cal Thomas et al, authors/talkers O'Reilly, Limbaugh, Hannity, Coulter et al, FOX News and the creation of myths like the "liberal media". How could I have forgotten all those things?

Maybe one common thread is that to me, so much of what the Republicans do involves playing on voter's emotions, i.e. getting them angry/indignant or causing them to be afraid (mostly in reference to the Democrats)...

Some common threads in my mind:

That kinda condenses it some. What do you think?

What are we to do about the type of tactics they use?

You asked, What are we to do about the type of tactics they use? THAT's the question. When is enough, enough? And what can we say in our blogs without fear of the thought police taking us away?

That's a good question... once Frist takes away the filibuster for judicial nominees, that will be like "the foot in the door", and once they taste that power I doubt the Republicans will stop at judicial nominees. Getting rid of filibusters altogether would give them carte blanche to do whatever they please in the Senate until some of the more moderate Republicans realize what's going on... and then Frist and his buddies won't be winning their votes, even if the votes are up-down. I think that for them it will be a matter of how much they can do, and how fast, before people catch on and vote them out of office. (That's what I hope, anyway. Let's take back the House and Senate in 2006!)

I'm actually feeling hopeful. Dubya's falling numbers are definitely going to help the Dems in 2006 and you can tell the moderate Republicans (Voinovich, for example)are starting to understand the price they have to pay in order to stay loyal to Bush. And on a pragmatic level they know that they will need the filibuster when the Dems take control again...