This story got hardly any play in the MSM, so I've decided to give it a push here. It's the kind of news item that makes you jump out of your seat and yell: YES, FINALLY!

Yesterday morning in Charlotte, a Bush PR event on the war on terror went off-script when a man named Harry Taylor took the microphone. Watch the video:

“‘I feel like despite your rhetoric, that compassion and common sense have been left far behind during your administration,' Taylor said, standing in a balcony seat and looking down at Bush on stage. ‘And I would hope from time to time that you have the humility and grace to be ashamed of yourself.’” 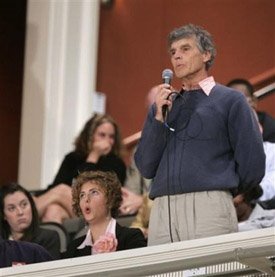 Read below for the full exchange:

Q You never stop talking about freedom, and I appreciate that. But while I listen to you talk about freedom, I see you assert your right to tap my telephone, to arrest me and hold me without charges, to try to preclude me from breathing clean air and drinking clean water and eating safe food. If I were a woman, you’d like to restrict my opportunity to make a choice and decision about whether I can abort a pregnancy on my own behalf. You are –

THE PRESIDENT: I’m not your favorite guy. Go ahead. (Laughter and applause.) Go on, what’s your question?

Q Okay, I don’t have a question. What I wanted to say to you is that I — in my lifetime, I have never felt more ashamed of, nor more frightened by my leadership in Washington, including the presidency, by the Senate, and –

THE PRESIDENT: No, wait a sec — let him speak.

Q And I would hope — I feel like despite your rhetoric, that compassion and common sense have been left far behind during your administration, and I would hope from time to time that you have the humility and the grace to be ashamed of yourself inside yourself. And I also want to say I really appreciate the courtesy of allowing me to speak what I’m saying to you right now. That is part of what this country is about.

THE PRESIDENT: It is, yes. (Applause.)

Q And I know that this doesn’t come welcome to most of the people in this room, but I do appreciate that.

Q I don’t have a question, but I just wanted to make that comment to you.

THE PRESIDENT: I appreciate it, thank you. Let me –

Q Can I ask a question?

I’d like to describe that decision I made about protecting this country. You can come to whatever conclusion you want. The conclusion is I’m not going to apologize for what I did on the terrorist surveillance program, and I’ll tell you why. We were accused in Washington, D.C. of not connecting the dots, that we didn’t do everything we could to protect you or others from the attack. And so I called in the people responsible for helping to protect the American people and the homeland. I said, is there anything more we could do.

And there — out of this national — NSA came the recommendation that it would make sense for us to listen to a call outside the country, inside the country from al Qaeda or suspected al Qaeda in order to have real-time information from which to possibly prevent an attack. I thought that made sense, so long as it was constitutional. Now, you may not agree with the constitutional assessment given to me by lawyers — and we’ve got plenty of them in Washington — but they made this assessment that it was constitutional for me to make that decision.

I then, sir, took that decision to members of the United States Congress from both political parties and briefed them on the decision that was made in order to protect the American people. And so members of both parties, both chambers, were fully aware of a program intended to know whether or not al Qaeda was calling in or calling out of the country. It seems like — to make sense, if we’re at war, we ought to be using tools necessary within the Constitution, on a very limited basis, a program that’s reviewed constantly to protect us.

Now, you and I have a different — of agreement on what is needed to be protected. But you said, would I apologize for that? The answer — answer is, absolutely not. (Applause.)

At first glance, I have to wonder why on earth would Bush's handlers send him out to have people criticize him publicly and then give unscripted responses? Maybe they figure they have nothing left to lose? But the more I think about it, the more I think it is a carefully planned thing.

Of course if they only do this kind of thing with unscreened audiences in areas where there are large concentrations of Republican voters, it will look like those who criticize Bush are all getting roundly booed by most of the rest of the audience, thus giving the TV audience the impression that "most Americans support the president".

I don't think they would dare do something like this in Boston, or New York City, or San Francisco, or Portland or Seattle. It will probably happen only in Bible Belt states, in the South, and maybe in the Midwest.

You have a good point, Snave.

I highly doubt that we would see that kind of exchange in a blue city.