I belong to the church of dog 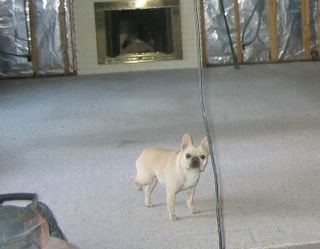 My French bulldog, Norman, started limping on & off about a month ago, so I took him to the vet. After x-rays were done, his vet said that it looked like he stretched a ligament in his knee and he might have the beginnings of arthritis. She put him on a glucosamine/chondroitin supplement.

When his limping got worse, I took him back to the vet. She said she didn't like the feel & sound of his knee. She suspects a torn meniscus (knee cartilage.) She put him on Rimadyl and referred me to an orthopedic surgeon.

His consultation is tomorrow at 1PM and I'm very worried. I know they are going to recommend surgery. The thought of my little guy under the knife is very, very scary. It may be sad to some, but my dogs are the main focus of my life and if anything were to happen to him (or Stella)... well, I don't even want to think about it.

I just have to keep telling myself that everything will be ok. He was fine when he was neutered, and he was fine when an English bulldog (lightly) attacked him at the dog park.

I'll let you know how the appointment goes. 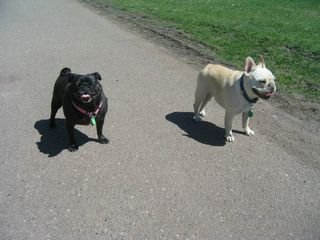 Good luck. I hope everything works out okay.

Keep me posted - I'll be thinking of you.

Good luck to you and Norman! Hopefully he will be o.k.

Poor little fella, hoping everything goes well for him - really sad (cool that hes still got some pluck about him)

Your babies are so cute, I wish Norman all the best. Doggies just want all our love, so it is upsetting when they are not feeling well.