Obama is the man!

Well, folks, we did it. Obama is our candidate, and I couldn't be happier.

Tommy & I tried to see him claim the nomination at the Xcel Energy Center in St. Paul last Tuesday, but along with about 20,000+ others, we didn't make it inside. 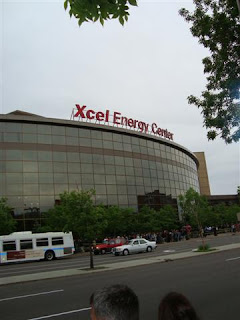 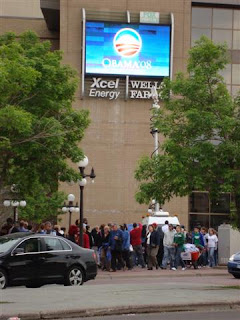 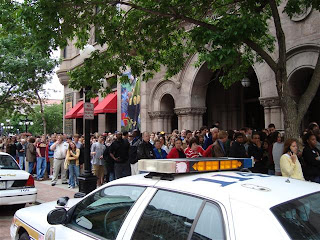 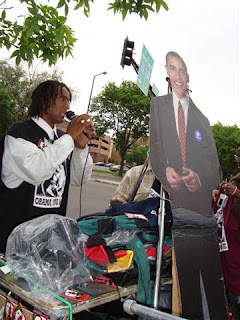 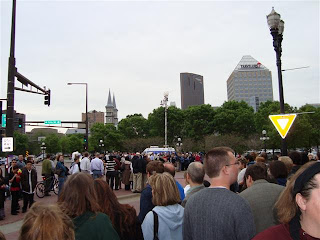 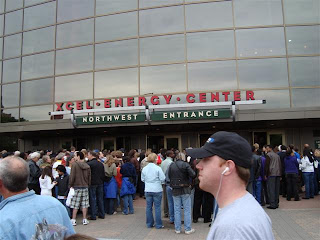 Thanks for the photos, and isn't this wonderful! Obama is the right person at the right time, as I see it.

McCain doesn't have much to hammer him on except the "experience" thing. I think it was J.Marquis who said that McCain will try to equate patriotism with militarism, and I think America will be wise to that strategy this time around. What else can McCain do to get voters excited? Heh... I don't think it will be a cakewalk or a landslide for Obama, but I think he will win out. If not? I might be looking for jobs north of the border.

As for VP, Obama CAN'T choose Clinton. True, it might help in some ways, but I think it would hurt more than help because the GOP will already be trying to characterize Obama as "weak". If he is perceived as succumbing to pressure from the Clintons to place her on his ticket, they will say that makes him look "weak". Also, if Obama's veep candidate is thinking about the possibility of assassination, that should suggest to Obama that just maybe that person isn't quite all there and might not make such a great running mate.

It isn't about the VPs, or course, but McCain has the charisma of a turnip and he will try to find an energetic, young running mate.
I am willing to bet money that McCain will balance his ticket by choosing Louisiana's fundamentalist religious governor Bobby Jindal. It will make his bid look younger, multiracial, more Southern, and more religious.

For Obama, my hope is that we will see him choose someone like Senator Jim Webb from Virginia. This would help deflect some of the critics of the Democratic ticket who will harp on Obama's lack of military experience and knowledge of national defense. It's a shame that the military stuff should have to be such a big thing, but I'm afraid it is because the Republicans are going to make it such. In any case, I think it will help Obama to choose someone who is from the "heartland" (whatever that is) or from the South, and who has a military background.

Oh, how I loathe the Republican party.

I think if he lets some time pass, the "weak" argument would die down and he could pick Hillary as VP.

However, I'd like to see him pick Bill Richardson, Jim Webb, or even think WAY outside the box and pick an anti-war Repub. He needs to do whatever he has to do to win, otherwise I'm with you...I'm outta here.

Thanks for the pics!

Hope you are well...

Lets hope we dont have a terrorist attack or attack Iran before November as Charlie Black thinks this will help McCain.

Cool dogs. My mom has a black pug. My Boxer loves playing with him.