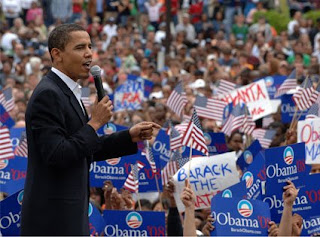 The new meme is that politics has returned to normal and that this election will now be run by Clinton rules. Many are relieved by this. You could sense the palpable discomfort among many in Washington that their world might actually shift a little next year. But if elections are primarily about fear and mud, and who best operates in a street fight, Beltway comfort returns. This we know. This we understand. This we already have the language to describe. And, the feeling goes, the Clintons can win back the White House in this atmosphere. What she is doing to Obama she can try to do to McCain. Maybe Limbaugh will help her out again.

What I think this misses are the cultural and social consequences of beating Obama (or McCain) this way. I don't mean beating Obama because the Clintons' message is more persuasive, or because the Clintons' healthcare plan is better, or because she has a better approach to Iraq. I mean: beating him by a barrage of petty attacks, by impugning his clear ability to be commander-in-chief, by toying with questions about his "Muslim past", by subtle invocation of the race card, by intermittent reliance on gender identity politics, by taking faux offense to keep the news cycle busy ("shame on you, Barack Obama!") and so on. If the Clintons beat Obama this way, I have a simple prediction. It will mean a mass flight from the process. It will alter the political consciousness of an entire generation of young voters - against any positive interaction with the political process for the foreseeable future. I'm not sure that Washington yet understands the risk the Clintons are taking with their own party and the future of American politics.

The reason so many people have re-engaged with politics this year is because many sense their country is in a desperate state and because only one candidate has articulated a vision and a politics big enough to address it without dividing the country down the middle again. For the first time in decades, a candidate has emerged who seems able to address the country's and the world's needs with a message that does not rely on Clintonian parsing or Rovian sleaze. For the first time since the 1960s, we have a potential president able to transcend the victim-mongering identity politics so skillfully used by the Clintons. If this promise is eclipsed because the old political system conspires to strangle it at birth, the reaction from the new influx of voters will be severe. The Clintons will all but guarantee they will lose a hefty amount of it in the fall, as they richly deserve to. Some will gravitate to McCain; others will be so disillusioned they will withdraw from politics for another generation. If the Clintons grind up and kill the most promising young leader since Kennedy, and if they do it not on the strength of their arguments, but by the kind of politics we have seen them deploy, the backlash will be deep and severe and long. As it should be.

He has a million little donors. He has brought many, many Republicans and Independents to the brink of re-thinking their relationship with the Democratic party. And he has won the majority of primaries and caucuses and has a majority of the delegates and popular vote. This has been a staggering achievement - one that has already made campaign history. If the Clintons, after having already enjoyed presidential power for eight long years, destroy this movement in order to preserve their own grip on privilege and influence in Democratic circles, it will be more than old-fashioned politics. It will be a generational moment - as formative as 1968. Killing it will be remembered for a very, very long time. And everyone will remember who did it - and why.

A very good article Lizzy.
I have to wonder though if Sullivan goes far enough though.
When hope is extinguished is is followed by despair, generally speaking despair is not partnered with apathy, it's partnered with chaos.
Washington and the powers that be are not buying themselves security (they think they are), they are not buying anyone a positive a future but I'm afraid they are they are setting a bed for the flames of insurrection.

A brilliant piece of writing by Mr. Sullivan!

The late 60's were a turbulent time, a time of assasinations, a time in which the people got together to "fight the power". I believe what we are seeing here is not quite the same re. intensity, but it is what it is just the same; given the nature of American society in the early 00's, I don't think it will manifest with such intensity, but it is there again. People are indeed getting desperate for something to change, and I believe Obama best represents the chance for our nation to begin doing things in at least a slightly different manner.

I agree with any assertion that the Clintons are representative of the "powers that be". I find the way so many Democrats support her to be very discouraging. People who say the Democrats and Republicans are very similar or are basically the same party must not be talking about the two party's platforms, because I find those strikingly different. I think what they must be talking about is the way politicians go about doing what they do. I don't see how the Clintons are much different than the GOP when it comes to funding sources, the kinds of campaign strategies used, etc.

I think Obama really may be the only hope this time around. Whether he is the most Kennedy-esque thing since Kennedy is debatable, but I think he does inspire a lot of people, particularly and very importantly, the young voters. The Clintons and the GOP must find the kind of support Obama gets to be terrifying, because he has such a broad range of appeal. He does want to unite the nation, and the "old guard" (i.e. the Clintons, McCain, Bush, Cheney, the Reagan worshippers, etc.) operate much more efficiently when the nation is divided. A more united America would pose great problems for members of the "old guard", and we are bound to see plenty of deseperate ploys from them between now and the Democratic convention.

Even though Obama leads in delegates and will probably finish the primaries with a lead, I will find it to be something of a miracle if he is able to beat Clinton anyway. She has the "machine" behind her, and he does not. He may lead her at the moment by a fairly comfortable margin, but I feel it is STILL like David taking on Goliath.

I don't really look at it as a case of good versus evil yet, but I am getting there.

I am holding out hope that this new form of triangulated Clinton Rules does not work.

I reject fear and embrace change...

I'm glad you liked the article, and thanks for the great comments.

Bottom line. Clinton needs to step aside before our party is torn apart completely. I know for me, her campaign to win at any cost has turned me off and I can't support her because of it. She may as well be a Republican.