"Sicko" in Top 5 Grossing Docs of All Time -- This Weekend it's "'Sicko' Night in America!"... from Michael Moore 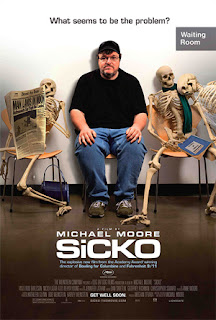 Latest letter from Michael Moore:
Thursday, July 19th, 2007
Friends,
Good news! "Sicko," after less than three weeks in national release, has become one of the top five grossing documentaries of all time! So, this coming weekend, the distributor is expanding the movie by opening it in nearly 500 new theaters in small cities all over the country (for a total of nearly 1,200 screens nationwide)! From Rapid City to Carson City, from Gettysburg to Pearl Harbor, from Juneau to Battle Creek -- they're all getting "Sicko" tomorrow (Friday). Scores of cities that never have a documentary come to their local theater will now be able to see this one. It's happening all thanks to you who live in the larger cities and have supported "Sicko" so strongly. It's led the studio to say, "Let's make more prints and ship them to Oshkosh (and Beaverton and Brattleboro and Sault Ste. Marie and...)." The entire country goes "Sicko" in less than 48 hours! (Check here for the complete list of theaters showing "Sicko" in North America.)
So, friends, this is it. This is the weekend to go see "Sicko" if you haven't seen it. I get a lot of letters from people saying they plan to "get around" to seeing it "soon." Well, soon is here! Trying to get theaters to give us screens when we are up against huge summer blockbusters is an almost impossible task. "Sicko" won't be around forever. And if you're waiting for the DVD, ask anyone who's seen "Sicko" -- this is a movie you want to see with a crowd of people in a theater.
So let's pack the movie houses this weekend! Send an email to everyone you know, call your friends and tell them, "It's 'Sicko' Night in America!"
And, to show my thanks to all of you who'll go see "Sicko" this weekend, I'm going to send one of you and a guest on a free weekend to the universal health care country of your choice! That's right. You'll get to pick one of the three industrialized countries featured in the movie where, if you get sick, you get help for free, no matter who you are. All you have to do is send us your ticket stub (make sure it says "Sicko" on it and has the name of the theater and this weekend's date on it -- Friday, Saturday or Sunday - July 20th, 21st, 22nd). Attach the stub to a piece of paper with your name, address, phone number and email and send it to: 'Sicko' Night in America, 888c 8th Avenue, Suite 443, New York, NY 10019. (Yes, you have to use that old 18th century device called the U.S. Postal Service, and it has to be postmarked on or by Tuesday, July 24th). First prize is a weekend in the city of your choice: Paris, London or Toronto. This includes airfare, hotel, and meals.
Canadians who are reading this -- you're probably thinking, "Hey, what about us? Where do we get to go?" Quit complaining! You're already there! But just to make it up to you -- and to prove we don't hold it against you for smugly walking out of a hospital with the same amount of money in your wallet that you went in with -- we'll let you participate in the drawing, too.
Thanks again to everyone who has gone to see "Sicko." Take a friend or two this weekend and celebrate "'Sicko' Night in America."
Yours,
Michael Moore
mmflint@aol.com
http://www.michaelmoore.com/
P.S. I'll be on "The Colbert Report" tonight (Thursday) on Comedy Central. On a sadder note, my appearance on CNN with Wolf Blitzer has been moved to a later date. Wolf just called to say he had a death in his family and that we would have to re-schedule. Our condolences to him and his family.
Posted by Lizzy at 7/19/2007 12:35:00 PM

Deffinately a movie worth seeing.

I hope everyone sees it.

I kinda want to live in France now...

That's funny, the right-wing attack dogs said it wasn't doing well. I can't believe they lied to us again.

I'm glad the movie is doing so well. That's probably why it came to my little town. It's been here a week; I hope it stays a long time.

Poli, I was thinking Canada, myself, but no one will go with me.

J, The right-wingers are lying? Say it isn't so!

Tom, I hope so, too. Everyone must see it.

Hi Lizzy, I still have not venture out to see Sicko.

It's great to hear that it has become one of the top five grossing documentaries.

Okay you've convinced me I'll have to haul my sorry butt down to the cinema and watch it with all the other common muggles.