I never thought I'd miss Nixon

Latest letter to the editor to the East Hampton Star from my wonderful & brilliant, Uncle Richard: 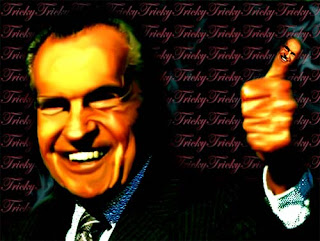 Want to know the extent of the loathing for the President and the current administration amongst the American people?

Last Saturday, at a fine Italian Restaurant in Milburn, New Jersey, I celebrated my birthday with my family. Amongst the varied small gifts I received from the kids and grand kids was a navy blue "T"shirt emblazoned across the front with big white letters:

"I never thought I'd miss Nixon"

a very appropriate and meaningful gift for the ever devout, pugnacious liberal from Bensonhurst, Brooklyn that I am and the kids know me to be.

I immediately donned the shirt over my existing one, right at the table, and wore it in the restaurant and as we walked towards the exit from the rear. As I walked, the diners in the very crowded restaurant saw the shirt and slogan and the reactions were amazing... ranging from outright applause to laughs and smiles, and then, believe it or not, several lovely female diners, of a certain age, strangers to me, jumped up from their table, grabbed me around the shoulders, and conducted an impromptu photo shoot!

If only our lilly livered Congressmen could have seen and felt those spontaneous reactions, maybe then they would wake up and impeach these sickening, malevolent, lawless, arrogant clowns in the White House who disgrace our country around the world, and destroy the very Constitution and liberties previous just wars were fought to protect.

If they feel like that about a President who was impeached or resigned, then you know there's a lot of Americans ready for a change.

I want comment on Nixon. because I don't want to hear the down side about the good that he did.

About that award thing, if you can't find anyone else, you can use Let's Talk ABout It. I know there's a lot of blogs out here that can be picked, there's just some great writers.

I love it! I have to find one of those, great letter, your uncle seems like my kind of guy.

Ain't that the truth!

I think one of those shirts would be great to have. You uncle writes great letters, and he must be a fantastic guy!

My uncle Marc wrote a great piece, I may see if he will let me post it at my blog.

Miss Nixon?
Heck the way things are going even Stalin is starting to look like a reasonable leader next to this bunch.
So yeah, Nixon looks better now than he ever did in his day.
That's not saying anything good about Nixon, because there's really nothing good to say about Nixon just a whole lot more bad to say about BushCo.

As far as the new award thing goes, I'll check out some of your blogger friends...otherwise I'll keep tagging the same people over & over and this meme madness will never end! ; )

elvez, he's my kind of guy, too. I'd like to find one of those shirts, myself.

Snave, My uncle is awesome. Liberalism runs deep in our family.
I'd like to read your friend's letter.

1138, I agree. Bush is the worst President ever. Nixon almost seems like a Kennedy compared to BushCo.

Yeah that does really show the dire situation going on right now, with so many people wanting him out and some thinking that Nixon would be better for us now.