It always comes back to Neil

Over the last six years, many of us have been wondering -
Where are the protest songs of today? 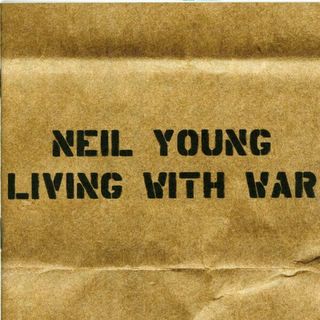 What if Al Qaeda blew up the levees
Would New Orleans have been safer that way
Sheltered by our government's protection
Or was someone just not home that day?

Thank god he's cracking down on steroids
Since he sold his old baseball team
There's lots of people looking at big trouble
But of course our president is clean.
Posted by Lizzy at 5/22/2006 10:42:00 PM

Of course our president is clean! Thank God!!

What a wonderful CD. I hope more and more artists will take a cue from Neil.

Poor POTUS can't ever turn on a radio without being brought down, I hear he is even being directly compared to Nixon these days even among the White House press corps ranks!

The more I listen to the CD, the more I think of Lennon's "Give Peace A Chance."

I picked it up and listened to most of it today.
Honestly it sounds like a bag of cats.
Whoa, whoa...
Don't get mad, I love Neil but his voice isn't the voice for these songs and the arrangements are not up to speed.
But that's not the point of the songs or the album.
Neil has created a template for other to use, and they will and only Neil Young had the courage to step out of the fog of past success and do it.
We all owe him a debt of gratitude and a serious listen to this album.
And younger, stronger voices need to take this template and run with it, and I'm sure they will if enough of us buy Neils version.

Give Families, Flags of Freedom, and The Restless Consumer another listen.