No plane, No plane!

Quote from the Department of Defense:

"Finally, we hope that this video will put to rest the conspiracy theories involving American Airlines Flight 77. As always, our prayers remain with all those who suffered as a result of those murderous attacks."


I don't know about you, but I don't see a plane. I see a small cargo/passenger plane, a missile, or some other kind of explosive device -- but a Boeing 757? No frickin' way. 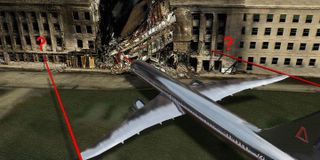 From the same point of view, the way materials of a 100 tons plane should move and what destruction they should cause in a crash against a building like the pentagon reinforce this impossibility.
Photo & caption: APFN.org

Th' fookers... they will do and say anything.

Another unresolved part of the puzzle is the fact that white smoke was coming out of the rear of the projectile...the kind a missle would produce.

Not mention the fact that all of the video frames read September 12th.