He must have used a tin can on a string 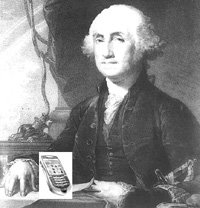 Three questions here. How did President Washington generate the 1.21 gigawatts of power required to fire up the flux capacitor in his souped up DeLorean time machine? Did he use the Mr. Fusion modification to get up to the requisite 88 miles per hour? And, as Atrios asked, what war was he fighting during his presidency which enabled him wartime executive powers? Strike that. I forgot. Washington fought with John and Sara Conner in the war against cybernetic organisms -- unsuccessfully since one of them would go on to become governor of California.

So for those of you Bush apologists ready to regurgitate Gonzales' justifications at the office Tuesday, you should know that electronic communication didn't exist during Washington's presidency. Neither did electric power for that matter.

Some other presidential facts which Gonzales failed to mention whilst citing precident from decades and centuries ago...

Andrew Jackson didn't conduct electronic surveillance -- unless he borrowed Washington's DeLorean, that is. He did, however, defy the Supreme Court by expelling the Cherokee nation from their homeland dooming 4,000 of them to die along the way. He did it all with full support of the American people.

Presidents Washington, Jefferson, Madison, and Monroe all owned slaves. While they were president. Out of 18 total slave-owning presidents, eight of them owned slaves while in office. Then again, slavery was perfectly legal in the United States in those days -- as was wiretapping without a warrant once, you know, wires were invented.

We've come a long way as a nation. Questionable, illegal, and immoral acts committed under the banner of the Executive in the past don't qualify as legal justifications for President Bush -- or any other president for that matter -- in the present or future. Speaking of which, a note to future generations: if you see a guy in pantaloons and a powdered wig running around with a googly-eyed scientist named Doc Brown, he's probably tapping your phones. From inside his DeLorean. Which is a time machine.

Did Gonzales really say that? That is absolutely hilarious... surely he would have a better grasp of U.S. History than that... !

He really said it. I heard the audio on the radio today.

You sometimes have to wonder if ithere isn't a contest going in the Bush administration to see who can get the public to swallow the biggest load of crap. Their lies get more outrageous all the time and people still seem to swallow it. Maybe it is a test to see if the radical right is truely hypnotized.