You can tell a lot about a person from the way they treat animals.

My best friend, Michelle, recently lost one of her beloved dogs. I have lost three dogs over my lifetime, so I know how it feels. It's heartbreaking.

Throughout my childhood & early teens, we had Taffy, a white toy poodle. Like all poodles, she was very smart. She did bite a few people from time to time, but in our eyes, they just added to her charm. 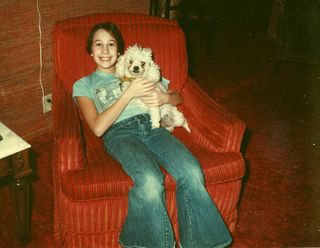 At 16, I got my first pug, Bentley. He was a great dog that insisted on taking long walks - even through the Minnesota snow. I still grieve for him as his life was cut far too short. 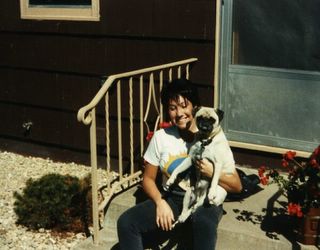 At 29, I got my second pug, Emily Beth. She truly was like a daughter, and will always hold a very special place in my heart. I cooked extra lean hamburger meat to add to her super-premium dog food everyday, because that was the way she liked it. I lost her a couple years ago, and still think about her everyday. 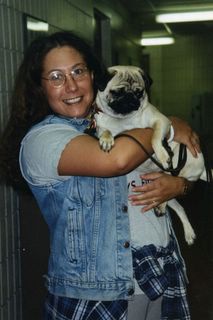 The reason I'm blogging about the great dogs in my life that have crossed into the Rainbow Bridge, is this piece that Michelle sent me. This one really got to me.

A boy and his dog in Bushland, by M. Kane Jeeves

Last week, my wife and I lost our best friend to cancer, a fluffy Westie, “Laughing Gravy, ” named after an old Laurel and Hardy film. He’d been with us 16 of our 17 years of marriage.

My wife cooked his meals, as she does for our other two dogs, after she found out the contents of corporate dog food were notso hotso. When Gravy went off his food? I barbecued for him. We hand fed him. I’d put on Dean Martin songs and dance and sing around his bowl to give him his food and his pills.

You can tell a lot about a person by the way they treat animals. My wife cooked. I sang and danced.

In his youth, George W. Bush blew up frogs.

As an adult, to appear vaguely human, he carries around his Scottie, Barney, like a log, dropping him on his head from time to time. Is it any wonder he has no idea what he has done to the people of the Gulf Coast in terms of Katrina? Is it any wonder he had no idea what he has unleashed in terms of the catastrophe known as Iraq? 1,904 Americans dead. Countless Iraqis.

He has no depth, no feeling, no sense of self. But, he uses a dog to make him seem human. A regular guy.

After all, it was his mother, Babs, who used her dog Millie as a shill to sell a book. She passed herself off to the public as the ultimate “Aunt Bea.”

But, her real self bubbles up every so often. And it ain’t Aunt Bea.

It was Dubya’s mother (dubbed by Jeb as “The Enforcer”), who said, before the illegal invasion of Iraq: “Why should we hear about body bags and death and how many? It’s not relevant. So why should I waste my beautiful mind on something like that?” It was his mother who said, after the devastation brought by Katrina and after visiting the homeless barely clinging to their minds in the Houston Astrodome. “And so many of the people in the arena here, you know, were underprivileged anyway, so this, this is working very well for them.”

Then she added the capper: “What I’m hearing, which is sort of scary, is that they all want to stay in Texas.”

Dubya is a bad seed, spawned by other bad seeds. His family has never been about feeling or compassion, but about making a buck…at any cost.

His mother, Barbara, didn’t attend her own mother’s funeral. After George’s younger sister died at the age of three, and he was just seven? She went golfing the next day. George never even knew his sister was terminally ill. The rest of the neighbors did, though. They wouldn’t let their children near the girl, fearing that leukemia was contagious.

George’s Dad, George I, is a former CIA guy who facilitated dictators getting U.S. guns and ammo and, then, when President, pardoned all who were accused of concocting the Reagan era’s Iran-Contra scam. George I, of course, was innocent of any wrong-doing because he was out of the loop… as the veep and a former CIA guy. Wanna buy a bridge?

Dubya’s grandfather and great-grandfather, Prescott Bush and George Herbert Walker, through the Union Banking Company and W. A. Harriman and Company, raised funds for Hitler to the tune of $50 million between 1924 and 1942. It was only in 1942, when the government seized Union Banking Company assets under the Trading With the Enemy Act, that George Walker and Prescott Bush stopped tossing money Hitler’s way.

This is a family worthy of Caligula…or Masterpiece Theater.

When the hurricane hit New Orleans, and people were drowning, George was literally eating cake at a previously set public appearance. He gasbagged about the great things going on in Iraq, comparing Iraq to W.W. II and inferring that he was today’s FDR.

The next day? When New Orleans was inundated? He stuck to his political schedule, pushing his idiotic domestic policies and, again, gasbagging about his triumphs in Iraq.

When it became clear that the FEMA and the Homeland Security laddies were running around with their pants around their ankles (For Christ’s sake, Homeland Security’s Michael Chertoff was talking about Avian Flu at a previously scheduled event while New Orleans was sinking deeper and deeper into murky water after massive levee ruptures twenty four hours after the storm made landfall. Chertoff didn’t even consider declaring Katrina a national disaster for 36 long hours.), Bush did…nothing.

Eventually, Dubya got into the “Rove” mode, realized everyone had been asleep at the wheel and went down to the South and hugged a lot of black people with his shirtsleeves rolled up. He tried to look like he cared. He joked about getting soused in New Orleans as a youth and vowed to rebuild Senator Trent Lott’s house. His polls plunged. So, he went back there, again, to hug a lot more black people. His polls plunged, again. Eventually, he gave a Disneyland speech from New Orleans from a dry area of town in Jackson Square, lit by Hollywood experts using generators flown into town for a few hours.

His poll numbers continue to sink.

Well, the first thing Bush did, aside from awarding billions of dollars’ worth of no-bid contracts to Halliburton and its ilk to rebuild the Big Easy, was to suspend a Federal law dating back to 1931 that would guarantee American workers the average rate of pay that prevails in the reconstruction regions. It should be noted that in the Katrina-devastated section of the country, construction wages are notoriously low as is.

Someone at Halliburton is dancing a jig, right now, crooning “Money Makes the World Go Round” from the soundtrack of “Cabaret.” Essentially, Bush has just given them the right to hire workers at coolie wages.

We have a corrupt, unfeeling President, surrounded by corrupt, unfeeling sycophants, who are trying to spin death as a GOOD thing. New Orleans will be bigger and better than ever! Lots of jobs will be created! That next Mardi Gras is gonna be bitchin’!

Meanwhile, we have another hurricane, Rita, spinning towards the Gulf Coast.

We have Republicans blaming the poor for not getting out of the way of the storm in time.

We have Fox News bobble-heads blaming, of course, Clinton, for not strengthening New Orleans’s levees.

We have right-wing pundits blaming any Democrat in sight.

We have a President saying that he’ll spend all that it takes to rebuild New Orleans and ignoring the deficit while shoe-horning in every PNAC wet dream imaginable from school vouchers to the corporate take-over of public schools to free enterprise zones as part of his plan.

We have Bush’s top federal procurement official in charge of Katrina contracts, David Safavian, resigning on Friday and getting arrested on Monday for lying and obstructing an FBI criminal investigation into “Honest” Tom DeLay’s old cronie Jack Abramoff’s dealings with the federal government.

We have Bush flying back and forth from D.C. to the water-ravaged sections of the country, talking about “armies of compassion,” which is about as moronic a phrase as “A-Bomb of love.”
And, if these photo op trips don’t boost his ratings? One of these days, he’ll bring his dog.

You can tell a lot about a person from the way they treat animals.