Let's hope that this song sets off a domino effect on the rest of the (cowardly) music industry. Other than Green Day and a few others, there hasn't been any real protest songs of late. Sometimes it takes the right song at the right moment to set things off. Thanks Mick & Keith. 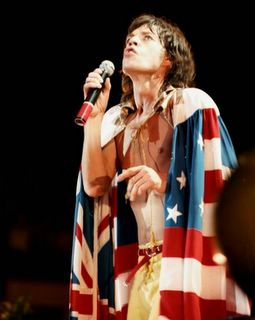 NEW YORK (AP) -- The Rolling Stones' upcoming album contains a song seemingly critical of President Bush, but Mick Jagger denies it's directed at him, according to the syndicated TV show "Extra."

"It is not really aimed at anyone," Jagger said on the entertainment-news show's Wednesday edition. "It's not aimed, personally aimed, at President Bush. It wouldn't be called 'Sweet Neo Con' if it was."

The song is from the new album, "A Bigger Bang," set for release September 6.

There is no mention of Bush or Iraq. But it does refer to military contractor Halliburton, which was formerly run by Vice President Cheney and has been awarded key Iraq contracts, and the rising price of gasoline.

"How come you're so wrong? My sweet neo-con, where's the money gone, in the Pentagon," goes one refrain.

The song also includes the line: "It's liberty for all, democracy's our style, unless you are against us, then it's prison without trial."

"It is certainly very critical of certain policies of the administration, but so what! Lots of people are critical," Jagger told "Extra."

A representative for the Stones said the group had no further comment about the song.

Come on Mick we all know who the song is about, not need to hide it.

Kick'n to see Greenday still in the picture, always loved their stuff.

(still trippin over how much your bird cage cost Lizzy, yikes)

Our band plays "Ohio", "For What It's Worth", and "Rockin' In The Free World". But we need to add more protest songs!! Bravo to Mick and Keith. I'll have to hear their new songs, and maybe we can cover the one about GWB!

I would like to remember "It's in times like these we learn lo love again..." from Foo Fighters..
I would like also to ear something from the snave's band.

Damien,
To make matters worse - the bird doesn't even like being in its $500 cage! It prefers to hang out anywhere but there. Ouch.

Snave, I'm so glad to hear that you are covering those great songs. I'm with gtx - I'd love to hear them.

That prison without trial line is similar to the lyrics in my peace song. :-) My song went:

"The Pied Piper of Crawford
Will throw us all in jail
No jutice from the piper
No counsel, trial, nor bail."

GTX, yes! "Times Like These" by the Foo Fighters is a great song! I will have to get a copy of it and introduce it to our group!