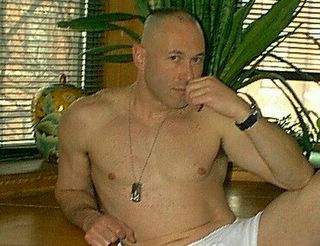 Here he is! Jeff Gannon's advertisement for sex.


From AMERICAblog:
CBSNews.com: Comparing bloggers to Hunter S. Thompson by John in DC - 3/3/2005

Again, wow. I have to admit, I've never read his stuff. I really need to.

Several obits of the late Hunter S. Thompson described him as a precursor of today's bloggers. As The New York Times viewed it "his early work presaged some of the fundamental changes that have rocked journalism today. Mr. Thompson's approach in many ways mirrors the style of modern-day bloggers, those self-styled social commentators who blend news, opinion and personal experience on Internet postings. Like bloggers, Mr. Thompson built his case for the state of America around the framework of his personal views and opinions.

"Having spent the better part of the past two weeks in the blogosphere working on a column on Jeff Gannon and Talon "News," the comparison leaped out at me. Although many of the stories about Thompson described his behavior as outmoded and stuck in the '60s and '70s while Aspen and the rest of the world had moved on, he in fact made the conversion to the Web quite well. He wrote a column for ESPN.com and in 2002, Shift, a Canadian digital-culture magazine, named him, along with Matt Drudge, two of the top 25 Web personalities....

There is information on the blogs that is extremely helpful to advancing a story and journalists who ignore blogs are overlooking a huge resource. Media Matters, Americablog, Kos and their contributors plucked information about Gannon, Eberle, Rove, et al, quickly and disseminated it before Talon News and GOPUSA decided to remove it from their sites. The guerilla warfare continued last week when a conservative site, The American Spectator, put up a controversial ad attacking the AARP, which was then captured and circulated on the liberal sites, eventually making it to the MSM. By the time the MSM discovered the story, the Spectator had taken down the ad.

But, as Rosen says, bloggers are more than information providers. Their anger toward and distrust of the traditional media and the political establishment are palpable. After the Gannon column ran, I received hundreds of e-mails demanding to know why the msm was ignoring the story. One of the ways the mainstream has dissed the blogs has been to label them as having agendas and not being "objective." But that doesn't make their information wrong or their points of view irrelevant. Many bloggers are people who care passionately about public issues and who are frustrated that their viewpoints aren't expressed in public debate. The frustration became so great on the right that The Washington Times and Fox News were created and found a readymade audience.
Posted by Lizzy at 3/03/2005 11:01:00 AM

Lizzy, I sent the Gannon picture over to a conservative blogger named Ala (mobyrebuttal@blogspot.com). She puts a lot of photos of hunky military guys on there and I tried to trick her into using this one...but I doubt she fell for it.

Ummm think Gannon needs to work on his pecks and media career (well not that theres anything left of it).

I remember reading a peice Hunter put out last year, best attack peice ever, still have it in a draw. Hunter the precursor blogger, yep I'd totally agree with that. Strangely FOX reporters would also meet his own 'gonzo journalist' criteria, real stories, presented with a fictional bent, with the reporter as the central protagonist.

Too funny (both of you!)

Tighty whities and dog tags, whos into that (Gay or straight)

even i wouldn't do him . . . this is so surreal, if the white house didn't clear this hack, then we are in more trouble than they claim.
you can't convince me he wasn't a plant.
i love this government, er, country . . .
i'll say what ever ya want, but it'll cost ya!