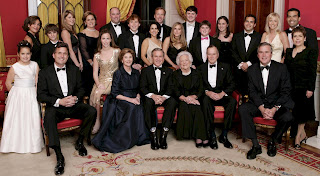 First? Come down South, and we can tell you about some other dirty players. We have our share, and if you examine your region carefully, I would be shocked if you can't say the same. He's not even the dirtiest I've seen. True, he has the most power of any dirty player I've seen, but he's not the dirtiest.

That is fascinating Lizzy, I'm going to forward that around, alot of coincidences there that aren't easy to explain. I know the wingnuts did this kind of thing with Clinton, Vince Foster, etc, but this stuff especially the bin-Laden info is disturbing.

Damn! That is one of the finest rundowns of a conspiracy I've ever seen. Bravo!

PoP, Indeed, they are.

MC, If BushCo isn't the dirtiest, who is?

elvez, It is extremely disturbing.

kvatch, Thanks, but I can't take all the credit, however I'm happy to pass it along.

VERY good post, Lizzy! If I get any comments from conservative friends who decide to talk about how Bill Clinton was a "murderer" I will have to refer them to this list. Excellent job! Clinton may have been about as straight as a dog's hind leg, but I've always figured that if anyone took the time to play "connect the dots" with Bush it would look just as bad, if not look much worse. And it does look worse than anything the GOP spinners tried to cook up re. Clinton.

Great post. All kinds of fishy things going on.

This isn't directly related to Bush (or maybe it is), but there are rumors that Hunter Thompson didn't actually commit suicide. Right before he died he was working on a story about what really happened on 9/11, and some people think he was "suicided" because he found out something he wasn't supposed to know.

Well, if that's what did happen to Hunter S. Thompson, I sure hope he had a copy of what he working on hidden away somewhere... and I hope that for every one of him, there are a few thousand others out there making discoveries. To make discoveries, we have to investigate. The more people investigating, the better the odds we can come up with some kind of "smoking gun" and get the Bushcreeps out of office.

It's the dirtiest Political crime family in America today.

Probably the worst President ever.

I'd have to go with Huey "Kingfish" Long for the dirtiest, and that mainly because Bush doesn't have the direct control of the legislative branch, and nowadays, not even so much indirect control. That said, Bush is the dirtiest of the current politicians, and given today's crop, that's quite a mark.

Hi Lizzy, I am going off subject here. I recall you mentioned once that you were going to have a colonoscopy, but changed your mind. I hope you have had it done by now, as I had it done today and was sleep during the whole procedure.

LT, I backed out of the colonoscopy because I couldn't drink the nasty stuff. I am scheduled for a sigmoidoscopy on Aug. 30, instead. I'm glad the procedure went well for you.

Tom, Wow, I hadn't heard that about Hunter. I'll have to look into it. It sounds plausible.

MC, But at least Huey Long did some good, which is more than I can say for W. However, dirty is dirty, and it shouldn't have a place in politics.

Yeah, Huey did some good, like suspending habeas corpus, attempting to make the mayoralties of three cities governor's appointees, pissing on and wiping his ass with the First Amendment, and otherwise setting an example for Hugo Chavez and other tin pot dictators. Prior to his assassination, he put together a power base the likes of which has not been seen before or since in this country, and set up what amounted to the first monarchy in U.S. history. No, considering all the bad Bush has done, Huey Long did much, much worse than Bush ever thought of doing, and what's worse is he knew exactly what he was doing.

Bush has also done some good. His stance on Darfur and in support of democracy in Georgia and the Ukraine are laudable. I would also express support for his actions resolving the Palestinian/Israeli conflict, but frankly, that's an exercise in futility, regardless of who's in the White House, largely because of the Palestinian leadership. Otherwise, he's been more or less a complete screwup.

Someone once said that in the South, the past still greatly influences the present, and that the past isn't even really past. So if you want a current official with Bush's level of malicious incompetence, look no further than Mayor Nagin of New Orleans. For the cronyism and corruption, well, you have to dig a bit deeper... Okay, Bush is the worst of the current obvious, though Alabama's former Governor Don Siegelman (D-AL) certainly would have given Bush a run for his money. For outright stupidity, you can look at another former jailbird Governor, Guy Hunt (R-AL).

You obviously know more about Southern politics than I do, MC. Thanks for all the info. You learn something new every day.

Looks like Jenna is going to spawn with one of Karl Rove's assistant and keep the fetal alcohol Dubya line going.

Jenna's a school teacher. Here's hoping she tells dear old dad how much of a nightmare his "No Child Left Behind" idea is. I think that, absolutely, teachers should be held to standards, and if they cannot or can no longer teach children, they should be forced into retirement if they are of age, or fired if they are not. No Child Left Behind, however, is an extremely asinine way of going about that.